Players You Should Know: Ross Ohlendorf 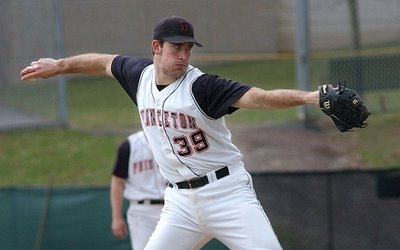 Ross Ohlendorf is a right-handed pitcher for the Arizona Diamondbacks. He has been rumored to be in the Randy Johnson trade that the Yankees are attempting to make. If that happens everyone will know him relatively soon but he won't be in most of the magazines and guides that are coming out at the end of this month. Last year for Double-A Tennessee Ohlendorf pitched 177.2 innings with a 9.12 H9, 0.66 HR9, 1.47 BB9 and 6.33 K9. His best pitch is a hard sinker that resembles that of Yankees' pitcher Chien-Ming Wang. If he remains with the D'backs he has a good chance of making the team out of spring training. With the Yankees he would probably be lucky to compete for a bullpen spot to start the season.

Some reading on Ohlendorf you may enjoy:

Posted by Jon Williams at 8:59 AM No comments:

New York Mets pitcher Pedro Martinez is recovering well from rotator
cuff surgery, but the ace right-hander still doesn’t plan to return to
the mound until July or August.
“The progress has been excellent,” said Martinez, who joined Vlad
Guerrero in a charity softball game. “The problem has to do with the
calcification of the bone that was broken with the tear and that had to
be operated on.
“You have to let it run its course, so we’re aiming for July or August
as the return date.” ...
“I don’t have problems anymore with my reach or flexibility, and so far
everything is going very well,” he said.
As part of his offseason regimen, Martinez said he is bulking up. “I’ve
put on about 10 pounds of muscle, because that’s one of our
strategies,” he said.

powered by performancing firefox
Posted by Jon Williams at 1:14 PM No comments: