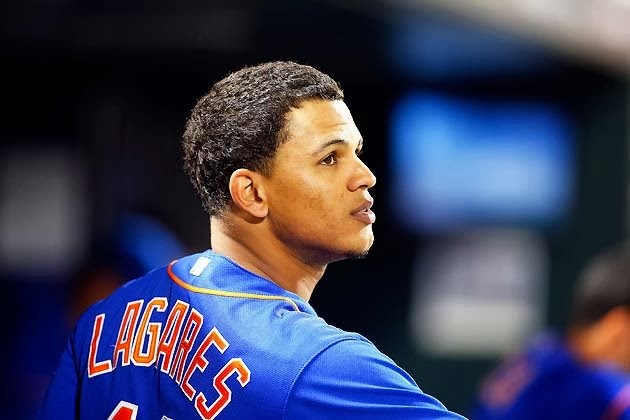 Juan Lagares is expected to be the Mets starting center fielder this season but can he hit?


Juan Lagares is expected to be the Mets starting center fielder to begin the 2014 season. Lagares is an excellent defensive outfielder. He has excellent instincts and hands and has developed a unique style that has him positioned closer to the infield than most center fielders. His arm is rated by most scouts as average but his instincts and accuracy with it makes it score like Thor tossing his hammer.
For fantasy purposes Lagares is no great shakes but he has made slow but steady improvement over the years. He will draw the occasional walk (though he is still below average in this area) and makes excellent contact. What he lacks is power. He should be good for a decent batting average based on a large number of ground balls and above average speed, and his recent track record in the minors. Some scouts report that he did square up the ball well in the minors, if he learns to do so in the majors he could become a regular .280-.290 hitter. He should also steal a few bases though he has never been particularly aggressive in this area he could steal 15-20 in a full season of play.

Let history inform your choices
If you have access look back at past drafts and search for trends in your fellow owners. Does one owner consistently draft young lefty pitchers? Does another fixate on much publicized sleepers? Does yet another owner always seem to have the best minor leaguers? Knowledge of your rivals gives you a degree of power over them. Call out the names of players that fit their typical plans early or force them to bid an extra dollar or two. Many owners struggle to adjust when their draft plans go awry. You can be the owner to make that happen. Let history be your guide.


Have a plan…any plan
Even a bad plan is better than not having one. It could be as simple as category goals to reach by the end of the draft (part of most good plans). It could be more complicated than Warren Buffet’s tax returns. The important thing is to have a plan of attack and to do your best to implement it. Owners without some sort of plan are more likely to forget about key players or to mess up their budgeting during an auction. There are tons of ready-made plans you can use, just adjust them to your league and the players available. If you need more ideas perform a web search for fantasy baseball strategies. I love it when a plan comes together.


Be ready to adjust when things do not go your way
Are you one of the more successful owners in your league? In many leagues the best owners will find themselves in bidding wars over any player they show even a smidge of interest in owning. Their rivals can seem more concerned with messing them up than in actually building their own winning teams. Having a decent Plan B can be the difference between a good draft day and disaster. The best way to avoid the need for an alternate plan is to have a plan with built-in options so that you are not easily hurt by those plotting against you. Is that paranoia? Not if they are out to get you.


Get your share of the Top Talent
In any draft there will be a few players that stand above the rest. In keeper leagues it is very possible there are only four or five players available with typical first round value. You should make a point of acquiring at least your share of that top talent and ideally you’ll be able to get someone else’s share of the top talent as well. The better your keeper list the more important this becomes. You do not want owners with weak keepers to be able to catch up to you just by drafting more of the top talent. It is vital to identify the best players available and decide how much of it you need to grab for yourself. Never decide you have enough to win. Be greedy.


Watch the scarce positions closely
Shortstop and second base are very shallow positions this year and though first base is deep the top tier is not deep at all and the fall to the second tier is longer than usual in my opinion. The top tier at first (in whatever order) looks like Joey Votto, Albert Pujols and Prince Fielder with everyone in the second tier having some problem or question about their potential production. At second base it looks like Robinson Cano and everyone else. I love Ian Kinsler, Dustin Pedroia and Jason Kipnis but each has issues that prevent them from being in the top tier. Shortstop is just Jose Reyes and Pray Tulo Stays Healthy. There is nothing wrong with being an elitist in fantasy baseball.


Yes, Starting Pitching is deeper but…
Many experienced owners have long practiced waiting until the mid-rounds to start building their pitching staffs. With the number of great young pitchers on the rise some owners have fooled themselves into believing they can wait until the late rounds to collect starting pitchers. That may be possible in some very shallow leagues but if you want the opportunity to score big in the pitching categories you will need to collect some of the top two tiers of starters rather than settling for the leftovers. The pitchers at the end of the draft may seem a lot better than in years past but the best pitchers are also a lot better. So do not wait too long to get your first few starting pitchers. Unless you like having the worst pitching in your fantasy league that is.


Go ahead and pay for saves
If the top closers – Craig Kimbrel, Jason Motte, Rafael Soriano and maybe Jonathan Papelbon – are available go ahead and buy one if the price is not terribly inflated. The closer position is so unstable that getting one of the top three guys could give you a huge advantage over your competition. However, if you miss out on the top three, maybe four, I suggest you wait and take the cheapest options available. Don’t avoid the category altogether in your draft as too many people are watching the waiver wire for possible saves these days. Your goal is to either get the safest options or the cheapest ones. No one likes being in the middle anyway.


Crave power above all things
The big homerun numbers have not gone away completely but when you get past the first two tiers of players the homeruns are just not available the way they used to be. Stolen bases on the other hand seem to be available at the end of drafts. There are more and more players on rosters (some do not even start) that can give you 10-20 stolen bases. Power hitters are much rarer. I like to grab power hitters that steal bases rather than devote any spots to pure base stealers. Those players are obviously much coveted by smart owners. Make the most of your dollars by avoiding the ones that could be batting average liabilities and spending a few more bucks on the best available five category hitters. Power does not just corrupt, it rules.


Stretch your draft day budget to the limit
Plan to own a few one dollar players. I try to create budget depth by planning to have a least one dollar player in each position group – one catcher, one corner, one middle infielder, one outfielder, one starting pitcher and one relief pitcher. This gives me a greater opportunity to own a top tier player in each position group as well. If you plan and execute well your one dollar guys will also be excellent sleepers. I often manage this by drafting young or inexperienced but also potential laden players in those low budget spots. Last season C John Jaso, 3B Kyle Seager, SS Everth Cabrera, OF Michael Saunders, SP Hisashi Iwakuma RP Fernando Rodney were excellent one dollar choices (wow, the Mariners dominated the end game!). Some early picks for dollar spots this season are C Erik Kratz, 2B Matt Carpenter, 3B Brent Morel, SP David Phelps and RP Sean Doolittle. If you can’t be rich, create the illusion that you are.


Dominate the End Game
Owners should attempt to save enough auction dollars to allow you to spend two or three bucks each on your last two or three players. This will eliminate the possibility that you spend the end of the auction getting outbid on players you can only nominate for a buck. At the end of most draft days there are a few players that stand out from the dregs. Perhaps talented rookies or veterans with uncertain playing time are still on the board. Most owners would prefer to avoid drafting the Michael Martinez types out of pure necessity so save a few bucks. Fill your roster with talent at every opportunity. Make your draft good to the very last spot.
Posted by Jon Williams at 10:37 PM No comments: