This sounds like great news for my friends at RotoExperts.

Here is the Press Release:

TORONTO --- Anthem Media Group announced today that its Fantasy Sports Television Network (FNTSY) has acquired 100% of the assets of New York-based RotoExperts and SportsGrid in a cash and stock transaction. The acquisition immediately stamps the new media company as a leader and innovative force in the already-exploding Fantasy Sports industry.

RotoExperts.com is established as one of the Fantasy Sports industry's premier websites and is regarded as one of the leading independent providers of fantasy content in the space. Since 2008, RotoExperts has rapidly grown to become a prominent national staple in online content, broadcasting and syndicated offerings to reach the estimated 40 million Fantasy Sports players in North America. RotoExperts programs over 30 hours per week on Sirius/XM Fantasy Sports Radio and has occupied the morning drive slot since the launch of the channel. Founder and CEO Louis M. Maione, a longtime Wall Street executive, will now join FNTSY Sports Network and serve as the Executive Vice President of Anthem Media.

SportsGrid, one of the top mainstream sports websites in the U.S., was acquired from Abrams Media. SportsGrid was founded by U.S. television personality Dan Abrams, who has been instrumental in establishing the site as a major destination and player in the sports and media worlds.

"This is a tremendous acquisition for us as we build out the world's premier fantasy sports media company," said Leonard Asper, President and CEO of Anthem Media. "We will have access to many of the most talented commentators to develop and expand the video content

for the TV channel, one of the most accomplished executives in the industry in Mr. Maione, and a great set of assets with which to market the channel."

"In SportsGrid, we add a popular website to serve as the core of our digital strategy for all our channels, including Fight Network, Pursuit Channel, FNTSY Sports Network and the other channels we will add moving forward," Asper added.

"I am thrilled to be joining the Anthem team as a shareholder and executive," said Mr. Maione. "As we were looking to further develop our web and radio presence with a team who can execute the broadcast component, Anthem became the perfect fit, so we decided to join forces to create scale and speed of execution. At RotoExperts, it has always been our goal and promise to the fantasy community that we would always bring them the highest quality of content online and on radio. Now, we can deliver the same standards of insights and information to their living rooms, where they have waited for it and really deserve it. Our vow to them is to keep innovating and surprising them because they have supported us and put us in position to give them exactly what they want."

Chad Midgley, VP Programming of Anthem and the FNTSY Sports Network, added: "We intend to continue working with all components of the industry, including other websites, talent on both sides of the border, and the providers of the statistics and data feeds that support the industry".

About Anthem Media Group Inc. Anthem Media Group Inc. is a media company operating niche television channels on linear, digital and mobile platforms globally. It is the owner of Fight Network, the world's premier combat sports channeland is a significant investor in Pursuit Channel, one of the top outdoor channels in the U.S., and FNTSY Sports Network, a TV channel to be launched this Fall targeting the burgeoning fantasy sports industry.

About RotoExperts Founded in 2008, RotoExperts quickly became one of the leading independent providers of fantasy content in the industry. RotoExperts has provided fantasy content to major sites and publishers such as NFL.com, Seahawks.com, Yahoo Sports, SI.com, USA Today and the Bloomberg Professional Service. RotoExperts programs over 30 hours per week on Sirius/XM Fantasy Sports Radio and has supplied regular broadcast content to TuneIn, Alloy Digital, the Beasley Broadcast Group and Fox Sports Radio. RotoExperts was nominated for a total of 51 industry awards in its first five years of existence. RotoExperts has won six Fantasy Sports Writers Association Awards in the past two years, including Managing Director Scott Engel being inducted with the inaugural class of the FSWA Hall of Fame.

About SportsGrid SportsGrid is the site for news, videos, and smart opinions about sports as seen through the eyes of the media-addicted fan. Its coverage of athletes, teams and coaches goes beyond the playing field, and in the SportsGrid world, a players' late night TV appearances and controversial political views matter just as much as their batting average. SportsGrid is the ultimate destination for the media-savvy sports fan who wants to stay entertained.

Posted by Jon Williams at 5:01 PM No comments:

Examining the Reasoning Behind the Jake Peavy Deal 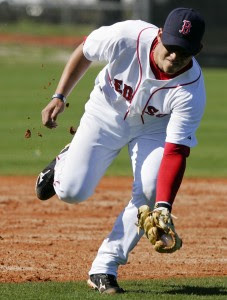 As fantasy owners we are almost always interested in the trades that happen between major league rosters. We get especially excited in the days leading up to MLB's Non-Waiver Trade Deadline. We want and expect to see big names and major loves that will radically change the face of Major League Baseball teams and the fate of our fantasy squads. Unfortunately the deadline deals rarely match-up with our great expectations. This year's deals were not an exception.

By far the most interesting deadline deal was the three-team deal between the Boston Red Sox, Detroit Tigers and Chicago White Sox. The Red Sox gave up young defensive shortstop Jose Iglesias (to Detroit) and a trio of prospects ( infielder Cleulius Rondon and pitchers Francelis Montas and Jeffery Wendelken) and received starter Jake Peavy from the White Sox and reliever Brayan Villarreal from the Tigers. Chicago received the Boston prospects and young outfielder Avisail Garcia from the Tigers.

Jose Iglesias is a good fit with the Detroit Tigers for a few reasons. If the Detroit Tigers have a weakness it is in their infield defense. Iglesias can provide the Tigers with Gold Glove quality defense at shortstop and even second and third base if necessary. Over the last few seasons, Iglesias has become a much better contact hitter with improved patience at the plate. It does not show in his walk rate but it does appear in his swing rates and his declining strikeout rate. Iglesias has close to zero power (2.2 HR/FB% and .079 ISO) but is becoming the type of player that can find ways to contribute (or at least not be a huge negative) in a lineup full of sluggers while contributing vastly increased defensive range. He still swings at too many pitches, especially outside of the strikezone. He is also unlikely to keep batting .330 or maintain his .379 BABIP but he should be able to hit for a decent average, at least for a power lacking defensive dynamo.

Iglesias' most significant contribution to the Tigers in 2013 is likely to be as the player who replaces Jhonny Peralta during his coming PED suspension. Peralta has yet to test positive for anything illegal or against the rules at this point. However, Bud Selig is determined to punish anyone linked to rumors of wrong doing via the BioGenesis scandal. So in effect, Peralta is being punished for not testing positive while being linked to BioGenesis. No, it is not meant to make sense. Peralta is likely to miss most of the remaining season. It is possible he could be around for the playoffs but it is difficult to see that happening if Iglesias is successful over the next two months. Peralta is a free agent after the 2013 season and could very well finish his career with the Tigers watching from home.This could mean Iglesias is the shortstop of the future for the Detroit Tigers.

The Red Sox were already in good shape heading into the season's last two months.They were playing well with a solid lineup, starting rotation and bullpen all contributing. The Red Sox also have a loaded farm system which is loaded with enough quality talent to allow them to deal their former shortstop of the future. But if you look closely you can see why the Red Sox felt they wanted another veteran starter.

Jon Lester is their ace in theory but recently went through a rough period similar to last season's disaster. Lester seems to have recovered relatively quickly but he does not inspire great confidence in Boston fans nor the team's management. Clay Buchholz finally seems to be the ace-level starter he was once projected to become but his track record of success is not long and his recent shoulder discomfort is worrying.

Peavy has a history of durability problems but was great in 2012 when he contributed 219 innings in 32 starts. Peavy is recently returned from a few weeks on the disabled list with a non-displaced fracture in his ribs. It is expected that this injury has contributed to a slight decline in his velocity relative to 2012 and some rust in his command since his return. But his elbow and shoulder are both strong and not an issue at this point. He has solid velocity in the low 90's and excellent control. He has a very solid strikeout rate and induces a fair number of ground balls when necessary but also allowed quite a few homers pitching in Chicago's homer friendly stadium. Fenway should be a little better for Peavy's stats and his fantasy owners. Most of all he has pitching experience that the talented youngsters on the team can use in this group's first run into the playoffs.

The White Sox had and still have an aging roster and a high payroll that does not provide much bang for the bucks. Avisail Garcia is the best prospect the White Sox acquired but is still very much a work in progress. More than anything else the White Sox are looking to load up their farm system and clear payroll so that the new management team can rebuild the roster with younger and more cost effective talent. Garcia could see a small power boost playing in Chicago but his lack of patience and over aggressiveness will limit his impact on fantasy rosters and in the White Sox lineup. Garcia is only 22 years old so he has plenty of time to develop the skills necessary to become a solid major league outfielder.

Here are the deals leading up to the deadline that you may interest you: (from ESPN)

• The Tampa Bay Rays acquired RP Jesse Crain from the Chicago White Sox for players to be named or cash. (July 29)

• The Detroit Tigers acquired RP Jose Veras from the Houston Astros for OF Danry Vasquez and a player to be named. (July 29)

• The New York Yankees acquired OF Alfonso Soriano and cash from the Chicago Cubs for SP Corey Black. (July 26)

• The Baltimore Orioles acquired RP Francisco Rodriguez from the Milwaukee Brewers for 3B Nick Delmonico. (July 23)

• The Texas Rangers acquired SP Matt Garza from the Chicago Cubs for SPs C.J. Edwards and Justin Grimm, 1B Mike Olt, and a player to be named. (July 22)


We can still expect to see some fairly big names moving during the waivers period. Alex Rios, Mike Morse, and Michael Young are some of the bigger names on the market and they could change the shape of some close races in both fantasy and MLB.

Posted by Jon Williams at 12:56 PM No comments: