New articles are up at Crucial Taunt and Roto Experts. The new Moving Up, Moving Down can be found on rotoexperts.com right here and the new Crystal Ball can be found here on CrucialSports.com.

Moving Up this week relates the new Iron Man movie to the St. Louis Cardinals. You'll have to read it to find out how I pulled that off. The new Crystal Ball makes some predictions about the Cincinnati Reds now that they've fired General Manager Wayne Krivsky.
Posted by Jon Williams at 11:49 AM No comments:

I have pieces on Rotoexperts.com and CrucialTaunt.com this week. You can find my weekly Moving Up, Moving Down column on rotoexperts.com once a week (usually on Tuesday) and my weekly Crystal Ball coulumn on CrucialTaunt.com once a week on Fridays. Please check them out, send your friends, make some comments and check out the other great articles these two sites have to offer.

This week (as it will every week) Moving Up, Moving Down examines the performance of a ton of players off to either fast or slow starts and examines their potential to turn things around whether that would be for the bad or the good. This week features: Andruw Jones, Joey Votto, Nate McLouth and tons more.

The Crystal Ball takes a look at the St. Louis Cardinals and their potential to maintain their quick start. It's a ton of fun and you also get to see my very tongue-in-cheek predictions for the season awards.
Posted by Jon Williams at 12:48 PM No comments: 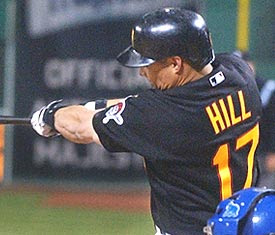 Many don't seem to realize it but there are dozens of great minor leaguers who never get the opportunity to prove they could have been stars in the majors. This can be the result of any number of things but most commonly it is injuries, faith-lacking managers and failed (and short) auditions that are the root-cause. One such player in my eyes was Bobby Hill, a shortstop prospect for the Chicago Cubs. He was a stud at the University of Miami. He held out for major bucks after being drafted first by the White Sox and then by the Cubs. He made quick work of the minors but had the unfortunate luck of running into Dusty Baker as his first manager. Baker gave him only short and sporadic opportunities to prove himself and when he failed to make an impression quickly he was banished to the bench once more.

Dusty Baker so negatively shaped the reputation of this player that he was included in a horrible trade to the Pirates. The Pirates refused to use him as anything other than a utility infielder and sparingly at that. Despite statistically being a better player than both Jose Castillo and Jack Wilson, Hill was never given another chance as a starter. Injuries to his back limited him in recent years. He hasn't appeared in the majors since 2006 after just 523 major league at-bats. Now he is playing with the Newark Bears of the Independent League.

You're probably wondering why I would spend so much space bemoaning the fate of a player that few will remember. The reason is because it could very well be happening again. Joey Votto is a highly touted young player who can perform at both the outfield and first base positions. He is a power hitter with speed that reminds me more and more everyday of Matt Holliday of the Colorado Rockies. He was widely expected to become the starting first baseman for the Cincinnati Reds this season but then something terrible happened - Dusty Baker was hired as manager. Now Votto sits on the bench and watches 38-year old Scott Hatteberg continue to start and to hit with almost zero authority. I sincerely hope to be wrong about this but if I were a Votto owner I would trade him in the best deal I possibly could right now. Before he meets a Hillish fate.
Posted by Jon Williams at 2:26 PM No comments:

Longoria is a Major Leaguer 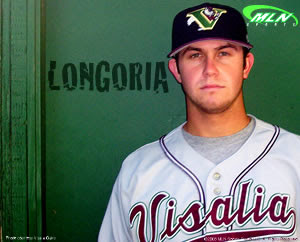 It stunned everyone when Evan Longoria was sent to the minors after a Spring Training in which he was considered a lock to make the team. Personally while I was surprised he hadn't made the team I didn't necessarily think it was a bad move. Longoria although capable had nothing to lose by spending a few weeks at Triple-A.

Well now Longoria is in the major just two weeks later to replace Willy Aybar on the roster. Here's my bet that he never sees the minors again. 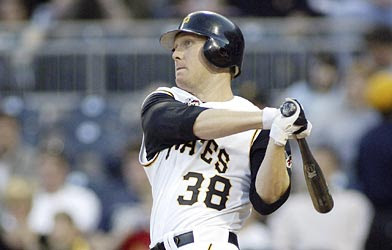 Hey, just because the season has started is no reason not to tell you about the guys i targeted in my drafts and auctions this year.

Last year in the National League I targeted Josh Hamilton and I got him in my NL-only league only to lose him when the Reds traded him for Edison Volquez. I raved about Heath Bell but for some reason picked him up as a reserve instead of making him my last $1 pitcher. In my league reserves can't be kept. I targeted Kelly Johnson and traded Jonathan Sanchez (who couldn't be kept beyond the 2007 season) for a $1 Johnson.

This year in the NL I thought I would grab Eugenio Velez for a buck but the Spring Traiing hype machine pushed him to $15 in NL-only. I still got him because I believe that he will eventually win the full-time second base job. In the meanwhile he'll play all over the field and steal 25 bases.

I also targeted Johnny Cueto and Edison Volquez. I didn't get either because I refused to pay the price they demanded ($15 and $10) at the moment they came up in my auction. I still believe that both will be solid major league starters for your fantasy team this year. I don't think they'll continue to be as untouchable as they've looked in the Spring and thus far this season but still quite valuable for those of you in keeper leagues. If you have them in a re-draft league I recommend you trade them by the end of May.

In the outfield I tried to trade for Lastings Milledge and Nate McLouth (at $5a and $2) but I was only able to get McLouth from him. I think both will be awesome players this season. Milledge has the ability to develop into a 30/30 type of player. This season I wouldn't count on more than 15/20 but the rest is coming soon. McLouth is a guy that I drafted for my minor league system a long long long time ago and then gave up on him. Actually I gave up on the Pirates, but same difference. McLouth has some on-base skills that have been quietly improving and pretty good speed on the bases. I'm expecting 15/25 this season and maybe a 20/40 peak season.

Next up? American League targets...
Posted by Jon Williams at 2:48 PM No comments:

I'm sure anyone that is still reading this blog has long since stopped looking for great advice to bring into your draft or auction. But I did help out a bit last season. I was ine of the very few touting Heath Bell as a great late round pick. I raved about the opportunity to grab Kelly Johnson who would be the new Braves second baseman. Sure, I also thought Darin Erstad would be worth a buck but more often than not I was helping.

You knew that Erstad thing was just a joke post, right?
Posted by Jon Williams at 2:42 PM No comments: