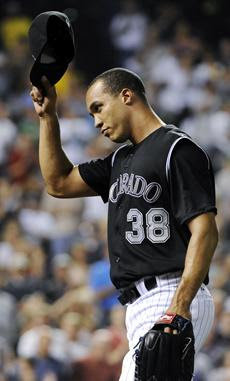 I've read a few smart people this morning say the Indians made a mistake trading for Ubaldo Jimenez yesterday. Their arguments are sound, mostly based on Ubaldo not being the pitcher he seemed to be in the first half of the 2010 season, and the Indians' mediocre record since their fantastic start to this season.

I understand what they mean. But a few points in defense of the Cleveland Indians need to be made.

First, Jimenez is not just a potential ace, he is signed for the next three seasons at a very reasonable price. Jimenez is also a much better pitcher away from Coors Field. The effect of pitching in Coors is not what it used to be but it is still one of the worst parks for pitchers in baseball. Eric Karabell pointed out this morning the Jimenez has a better xFIP this season (3.49) than he did last year (3.60). So away from Coors there is a decent chance his numbers rebound for the better.

Second, the Indians have a fan-base that has at times felt betrayed by the team ownership. They traded away players that were fan favorites and great players besides. a park that was once packed every night has had a lot of empty seats. giving up a few prospects from a loaded farm system to win back the fans is more than worth it if you want to have a successful organization. It can't be about just pleasing the number crunchers (I'm one) because at some point you have to please your customers.

I plan to make a reasonable bid on Jimenez in my AL-only league, It would be more if I were actually contending, but I'm hoping to acquire and trade him for a couple of keepers.
Posted by Jon Williams at 10:25 AM 2 comments: