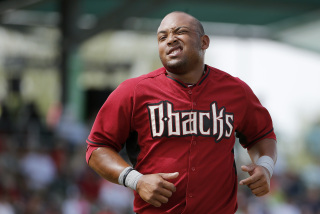 The Slow Fade - there are the players I see slowing down as the season comes to a close. Not necessarily at a disastrous level but way off their first half pace

Grandal is a good young hitter and he has clearly benefited from the move to Dodger Stadium from Petco Park. But I think his power numbers are a bit over his head and will fade over the last two months of the season. He can hit, I just do not see him as the 25-30 homer guy his 21.2 HR/FB rate (career 16.2) makes him out to be. I do have to give him credit for the improvement in his catcher defense.

Although Freeman has returned from his wrist injury quickly, I do not expect a big finish. Wrist injuries are notorious for sapping power. If I owned Freeman I would be grateful if he just stayed in the line up and hit for average. For the rest of this season I would consider any power a huge bonus.

I love Arenado but this is the season I expect the Rockies to finally trade off some of their more expensive players for an influx of younger talent. The result, I expect, would be a decrease in the pace of Arenado's runs and RBI. But if the Rockies sit on their hands again, you can ignore this completely. ***Since I started writing this piece the Rockies traded Tulo and there were plenty of rumors about CarGo as well.

It is easy to pick on Dee Gordon here, since he clearly is unlikely to hit .330 all year. He also has a history of second half collapses. I don't think he'll lose all value in the second half but the average will drop and his stolen base total pace will slow dramatically. I blame this more on a Marlins team that has lost all reason to keep fighting more than on Gordon's skills or lack thereof. I will like him again next year.

If you are in an AL-only league you already be feeling Reyes' loss. The temptation will probably be to anticipate a huge jump in stats for Reyes playing in the thinner air around Coors Field, but Reyes has never hit well there with a .254/.259/.447 slash in just over a hundred at-bats. On top of that, Reyes is getting old and already slowing down. The prediction for one of my favorite players is that he limps to the finish this season.

OF - A. J. Pollock, Arizona Diamondbacks

I like Pollock. I just think he's been playing over his head a bit. The power is already showing signs of fading. I think he will finish with quality season totals but the second half will not be nearly a great as the first. And I don't mean to pick on the Diamondbacks but...

Tomas has been much better than I anticipated he would be. But he has surprised a lot of people by hitting for average without power. I'm only surprised by the average. Still, the Diamondbacks (one of the more badly run organizations in my opinion) seem to be favoring keeping David Peralta and Ender Inciarte in the lineup at Tomas's expense. And I don't see the him hitting .300 in the second half.

Gomez is already having a down season but with the trade there seems to be a lot of speculation that merely being an Astro will transform him back into the All-Star of the last few seasons. Despite the Mets horrible track record with diagnosing injuries, I find it easy to believe he is playing through injury given his down power and speed this season. Just because he is able to play does not mean he is truly healthy.

He already has a few second half blown saves and now the Mets have brought in Tyler Clippard. I think the Mets will stick with him but Clippard is almost certain to steal chances from him.

Posted by Jon Williams at 9:13 AM No comments: