The Current and Future King of Fantasy Baseball 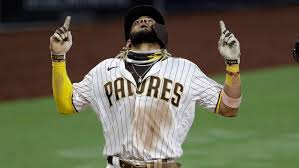 Fernando Tatis, Jr. is quickly winning the hearts of MLB and Fantasy Baseball fans alike. He has tossed away the old school book of unwritten rules in favor of far more exciting brand of play. Yes, he swings at 3-0 pitches when his team is up late in the game. Yes, he steals third with two outs while his team is up by six runs. He flips his bat. His emotions are on full display on the field. He is currently doing what few other players have ever done. He has entered a very small class with Hank Aaron, Willie Mays and George Sisler. He is leading baseball in Runs, RBI, Homers and Stolen Bases.

Please, make no mistake when examining Tatis. His attitude toward the old unwritten rules is exactly why he is the most exciting player in MLB and the most valuable to fantasy baseball owners. As of last night he was slashing .310/.384/.710 with 11 homers, 23 Runs Scored, 28 RBI and six Stolen Bases. If you did not draft him this year you blew your last best chance to get him for a decent price. Baring a disastrous event (fingers crossed) He will knock Mike Trout off the top of most drafts lists and become the new consensus number one overall pick for Fantasy Baseball.


Are the Red Sox Trading Another Stud?

Ken Rosenthal of the Athletics has suggested that the this may be the last chance for the Red Sox to trade Xander Bogaerts. He has language in his contract that gives him No-Trade Rights when he reaches seven years of service time. Bogaerts also has a potential opt-out after the 2022 season which only adds to the reasons to trade him now. Despite this I doubt he will be moved. I just think such a trade would result in a PR disaster for a Red Sox team that already traded away a team favorite and perennial MVP candidate.

Posted by Jon Williams at 1:29 PM No comments:

Laureano was suspended for the Brawl (you can see it in the attached video) that ensued when he could no longer take the antagonist Alex Cintron's (Oakland's Hitting Coach) taunts and threats. Considering he never landed a punch or really even got the opportunity to try before being tackled, his punishment (especially in the short season) seems severe. That is why we have appeals.
<iframe width="560" height="315" src="https://www.youtube.com/embed/l2NhptOahQg" frameborder="0" allow="accelerometer; autoplay; encrypted-media; gyroscope; picture-in-picture" allowfullscreen></iframe>


Don't Call It A Comeback

Charlie Blackmon cannot be stopped this season. Last night he collected another three hits to bring his batting average to .500 in 68 At-Bats. Blackmon is the first to achieve this feat since Barry Bonds in 2004. If he starts stealing bases again I would vote for Blackmon as Fantasy MVP! If nothing else his performance is fun to watch in a season with all sorts of unpredictabilities (and some sort of obvious) making the sport difficult to manage. Not to mention he makes the Rockies look good which is incredibly difficult given their tendency to do weird stuff to build their team.
<iframe width="560" height="315" src="https://www.youtube.com/embed/fZwciWijsTw" frameborder="0" allow="accelerometer; autoplay; encrypted-media; gyroscope; picture-in-picture" allowfullscreen></iframe>

Had I written the sleeper/breakout reports I used to write every pre-season this year, I would have spent a good amount of inches on Nick Solak. I love the guy. I tried to trade for him in my AL-Only league only to be rejected multiple times. If I had written about him I could be bragging about my level of fantasy genius. He looks like the Rangers new center fielder and plays just about every day.
From Baseball Prospectus:

The Rangers’ answer to that conundrum appears to be: everywhere. In 15 games, Solak has seen time in left field, center field, second base, first base, and at DH. The latter is probably his ultimate home, but the important thing for Texas is that he’s starting to do what they’re counting on him for: hit. And he’s about the only Ranger doing so. Even before Tuesday’s three-hit outing, Solak led the Rangers with a 121 DRC+. The power hasn’t been there (no homers and just three extra-base hits) but his BABIP (.293) doesn’t suggest he’s been getting lucky; he’s shown a keen recognition of the strike zone, too, with just seven strikeouts against six walks.

And In Completely Unrelated...

Presidential Candidate Joe Biden selected Kamala Harris as his running mate. I think this is a solid choice especially given his previous promise to select a woman and POC. Some in the Black Community blame her for the incarceration and long prison sentences of POC during her time as a State Attorney in California. This is ridiculous. She was doing the job she was hired to do putting away drug dealers and the like. She did not arrest anyone. She did not write the laws she was enforcing. She did not invent the sentences. She only did her job to the best of her ability. It should be a plus not a mark against her. If she does her job as VP half as well we will all be better off for it.

Posted by Jon Williams at 11:37 AM No comments: 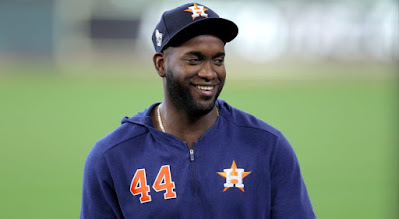 This has definitely been an odd season. 2019 featured a juiced ball that sent baseball's offense soaring to new heights. Even little middle infielders were contributing to the onslaught against starting pitchers. The 2020 season seems to be providing the pitchers with a bit of revenge, though maybe not quite as much as the slumpers on your fantasy team would lead you to believe. Check out this piece from Eno Saris of the Athletic:

But is there any evidence that this missing talent skews more toward the hitters? When it comes to non-COVID IL visits, the evidence is clear that pitchers are actually suffering more. Even when you look at the two teams most affected by the virus so far — the Cardinals and Marlins — though they are missing a lot of players, neither team was projected to be above league average with the bat. Friends, family, and fans of course are rooting for their recovery and return, but their absence does not explain the drop in league-wide offense.

A subscription to the Athletic is well worth a few dollars per month or the discounted annual rate. Eno goes on to give several reasons for the hitters slow start to the season - The Hitters Being Ahead of the Pitchers, The Ball is Less Lively, Pitching Strategies are Optimized, Even More Shifting, A Bigger Strike Zone and A Lot of Missing Talent.
I have certainly experienced the missing talent. From my three teams alone I've lost Lorenzo Cain, Yoenis Cespedes and Nick Markakis (I traded him before he came back) to opt outs. I have had to do without Jorge Mateo, Mike Moustakas, Miguel Rojas, Drew Smiley, Tim Anderson, Justin Verlander, Ken Giles and Roberto Osuna! I am not the only one suffering. The fact that I have managed to stay near the top in these leagues is testament to that.
The good news is if you managed to draft a good pitching staff you are probably doing pretty well. The current league average hitter is a new level of pathetic. If your guys are batting .220 or better, getting on base at .300 or better and hitting a few homers - that with solid pitching has been a winning combination in a lot of leagues.

Not All Bad News:

I was sad to see this on Facebook this morning, from John Sickels:

I am retiring from baseball.

The pandemic has put a lot of things in perspective for me. There are no minors to write about, which means no money coming in.  And I realized that the only thing keeping me connected to the game was money and that aspect of my career had grown stagnant in recent years.

As an analyst, I was one of the pioneers, starting on-line baseball analysis back in 1996. I was at the top of the game for a long time and am proud of that. But nowadays, there are lots of people doing this work, and the best of them do it better than I do.

It is time for me to clear the field and leave it to people who are the innovators. I'm a dinosaur nowadays, and I want to go out on my own terms rather than just fading away. The universe is telling me it is time.

John was one of the very best for a long time. ESPN, Minor League Ball and the Athletic all benefited from his analysis and writing skills. He will be missed.

Posted by Jon Williams at 1:15 PM No comments:

It has been a while. I was writing sporadically at best and less and less frequently as time went on. Unfortunately, I slacked so much that I neglected to renew my advanced fantasy baseball domain and lost it. I've moved everything over to the new Advanced Fantasy Sports. Along with the domain change comes a change in direction which I'll explain.

Writing baseball articles started to feel repetitive. I got tired of writing variations of the same sort of thing every day. So, I have a new plan. For the 2021 pre-season you will once again get my preparation articles, transaction reviews and sleeper predictions. But along the way you'll also get updates on the movies, tv, comics, books and so forth that keep me entertained. You may even see the occasional political article but I promise not to judge if you have a different opinion on things. In fact I encourage you to share your differing opinions. I don't think an echo chamber helps anyone.

Between now and the end of the truncated 2020 season you'll see the occasional rant or idea about players or anything else. If you have questions or need advice on your fantasy teams, please leave me comments and I'll do my best to help. I'm not nearly as out of touch as my sporadic posting might suggest.

I hope to see you around.

Posted by Jon Williams at 2:00 PM No comments: