So, it turns out some guys really do need  all those Spring Training at-bats. I am going to do my best not to hold 2020 against any player or credit any too much either. These slow starting batters will definitely get my bid next year: 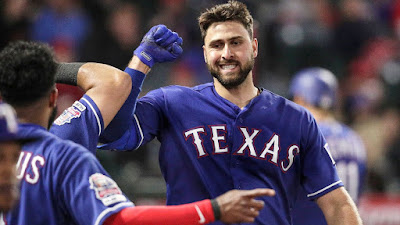 1. Joey Gallo, OF, Texas Rangers - The Rangers considered trading their best hitter before the deadline but wisely kept the price high and did not bite on any offers. Gallo has never been a great hitter for average but before this atrocity of a season I was predicting he would see a batting average uptick. I think I'll make a slight bet that that uptick is there for the 2021 season, given a full Spring Training at least.

2. Peter Alonso, 1B New York Mets - He was dreadful the first month of the season but has cranked it up the last couple of weeks. The power hasn't gone anywhere and Alonso admits his approach was screwed up earlier in the season. I will give Alonso a full price bid in 2021.

On the other hand, I'll only touch these slow starting "bats" as a last resort:

1. Khris Davis, DH, Oakland Athletics - I wrote off his disappointing 2019 season as injuries and the resultant lack of timing that results. I am certain that the short ramp up to the shortened season didn't help but the Athletics have also dramatically reduced his at-bats so his chances of fighting out of it and making a fantasy impact this year is almost dead. You can probably drop him and his one homer.  He would a significant discount to convince me to buy in 2021.

2. Gary Sanchez, C, New York Yankees - Like Davis he showed some signs of weakness last year. This season has reached new levels of futility and the Yankees are starting to lose faith. Sanchez is usually over-priced in any case, in 2021 he will need to come cheap to wind up on one of my teams.

On the other-other hand, this guy is in a weird category all his own and I have no clue at this point how I want to approach him:

1. Aaron Judge, OF, New York Yankees - Judge has been awesome this season when he has been on the field. However, despite the extra two months of rehab and alll the coddling the Yankees can provide, he just hasn't been out there much. I love the guy but unless he comes dirt cheap I will probably stay away.

Posted by Jon Williams at 7:00 PM No comments: