The Development of Carlos Gomez 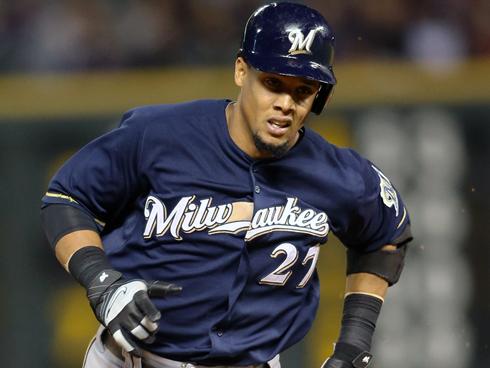 Carlos Gomez was once a top prospect of the New York Mets. He was such a nice prospect that the Minnesota Twins accepted him as the centerpiece of the Johan Santana. This is back when Santana was one of the best starters in the game. He was young but he projected to add power to his already impressive speed on the bases. The Twins never got much out of Gomez who was never better for them than his .291wOBA in 2008. The Twins sent him to the Milwaukee Brewers before the 2010 season for J.J. Hardy and a little cash.

Since 2010, Gomez has seen dramatic increases in his Flyball percentage, HR/FB, and his ISO. Just the increased power alone was enough to make him a slightly above average batter for the first time in his career. In just 415 at-bats Gomez set new career highs in batting average, homeruns, stolen bases, and WAR (3.5). For the first time in his major league career, Gomez did not represent a hole in the lineup. He was an asset.

Fantasy owners in most leagues made quite a profit by holding Gomez. He could not have cost much as he was trending towards just part-time at-bats and his low batting averages prevented his stolen base totals from increasing or being worth very much. Owners who have him cheaply can keep him with minimal risk because of his low cost. However, he is likely to see his price go through the roof in leagues where he is available, that is probably a mistake.

Carlos Gomez does not do any of the things that allow an owner to count on a consistent level of performance. He does not make consistent contact. His plate discipline is as real as the Easter Bunny and he refuses to take a walk. He could bat anywhere from .200 to .270 but do you really want him if he goes back to hitting .220? I doubt it.

On the other hand, Miller Park is giving a giant boost to power hitters from both sides of the plate. Over the last three seasons the park has boosted power from the right side of the plate by 28 percent and 30 percent from the left side. While Gomez has clearly benefited from this, it is also clear that his natural power (hopefully) has increased. As long as the at-bats are there for him, Gomez should contribute homeruns and stolen bases. If the average drops back below his career levels (.247) he could find himself back in a part-time role.
Posted by Jon Williams at 1:31 PM No comments:

What the Blue Jays Have Not Done 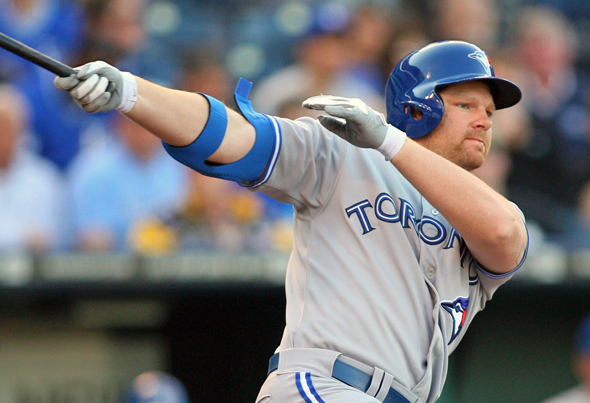 With today’s agreement on a contract extension between the Toronto Blue Jays and R.A. Dickey, the Blue Jays have successfully upgraded every aspect of their roster. They have a new leadoff hitter and shortstop in Jose Reyes. They have a new left fielder in Melky Cabrera. They have competition at second base between Macier Izturis (the favorite) and speedster Emilio Bonafacio, who if he is not at second will serve as an upgrade to Omar Vizquel the former utility player. The National Cy Young award winner is just one piece of a dramatically updated starting rotation: Dickey, Josh Johnson, Mark Buerhle, Ricky Romero, and Brandon Morrow. The team retained Anthony Gose as insurance against the continued regression of Colby Rasmus. Brett Lawrie is back at third base and primed for a big season after the experience of the 2012 season. The only spot that you might consider upgrading but has not even been considered by the Blue Jays is designated hitter – where their former stud first baseman now resides.

Not so long ago, Adam Lind was a top prospect and a player that oozed the potential that fantasy owners lust after. The Blue Jays selected him in the third round of the 2004 amateur draft out of South Alabama University. He performed very well in the minors, showing an ability to hit for both average and power. The Blue Jays took their time working him into the regular lineup. He worked as both a part-time designated hitter and left fielder. In 2009 he earned a fulltime role in the lineup and hit .305/.370/.562 with 35 homeruns which was right in line with projections based on his minor league performances.

He began the 2010 season right where the 2009 season had ended. But in early May of that season he was placed on the disabled list with a back injury which has been a recurring problem ever since. He got off to a great start to the 2011 season hitting .339, with 15 home runs and 44 RBIs in 46 games until the back injuries hit him again. It seems reasonable to assume that the back injuries have affected his swing at times. In fact early in the 2012 season there was a point where he could not bend over because his back was that stiffened and inflamed. Yet, he was not on the disabled list and was being treated with anti-inflammatory medication. Chris Lund of The Hardball Times wrote an article presenting video evidence of the changes in his swing due to the back injury.  He even suggests that the changes to his swing are causing the back injury to recur.

“The back injury is a significant marker because of the shift Lind has made in his swing. The way he engages his torso and lower half puts greater strain on his back for a player trying to generate enough bat speed to hit for power. As such, we have seen Lind miss games due to wrist and back injuries in the time since the original back problem.”

On May 17th of the 2012 season, Lind was sent to the minors. He was batting just .186 with three homeruns at the time. Two weeks later he was taken off the 40-man roster. The Blue Jays claimed they wanted Lind to work with minor league hitting instructor Chad Mottola on regaining his stroke. They clearly stated that there was no timetable and that he would not be recalled until they were certain he had earned another opportunity. Lind played 35 games altogether in the minors during the 2012 season. He hit .545/.615/.818 in three games at the double-A level, and .392/.448/.664 in 143 plate appearances for triple-A Las Vegas where he worked with Chad Mottola. On June 24th the Blue Jays recalled Adam Lind to the major leagues. He was a different player at that point.

Obviously Lind did not transform back into the masher of 2009 but he became productive once again with a wRC+  of over one hundred in each month since. The major difference between these numbers and 2009 is almost entirely in batted ball types (and another stint on the disabled list with back problems). Lind is hitting a lot more groundballs and infield flies. His HR/FB took a turn in the right direction but with Lind hitting so many balls on the ground it does not show in his homerun total. However, if Lind does nothing but maintain his swing and this type of production he could hit 20-25 homers with a solid batting average.

The key to Lind’s productivity is health. If he can stay off the disabled list and do the necessary stretching and exercise to both stay in shape and prevent his back from tightening it could help him put up numbers more in line with his potential. There is some hope that the big changes to the Blue Jays roster this offseason will serve as motivation.  Adam Lind is no longer the young guy that’s been there the longest. He does not have to be the veteran presence or protect anyone in the lineup or even play defense. All he has to do is hit and until the last couple of seasons he had done that very well his entire life.
Posted by Jon Williams at 1:01 PM No comments:


1)      Whenever a player seems to move to a better team his trade value increases. There is nothing fantasy owners like more than something new. Shiny new rookies with glittering minor league stats are almost always drafted too high. The same thing happens a veteran player joins a new team. The important thing to remember is that in addition to rule one, things like park factors, league changes, and coaching styles have a far greater impact than the name on the jersey.
Posted by Jon Williams at 9:45 AM No comments:

When a player changes teams there is increased risk.

A lot of analysts will tell you about ballpark factors and league changes that will have an influence on a player’s production. There is more to it than just that. There is a comfort level that could change for the better or the worse. Different coaching styles could alter a player’s style and consequently change his production. It will not always be a negative change but for every Gio Gonzalez there is a Shawn Marcum, a John Lackey, a Jonathan Sanchez or Barry Zito.
Posted by Jon Williams at 1:34 PM No comments: