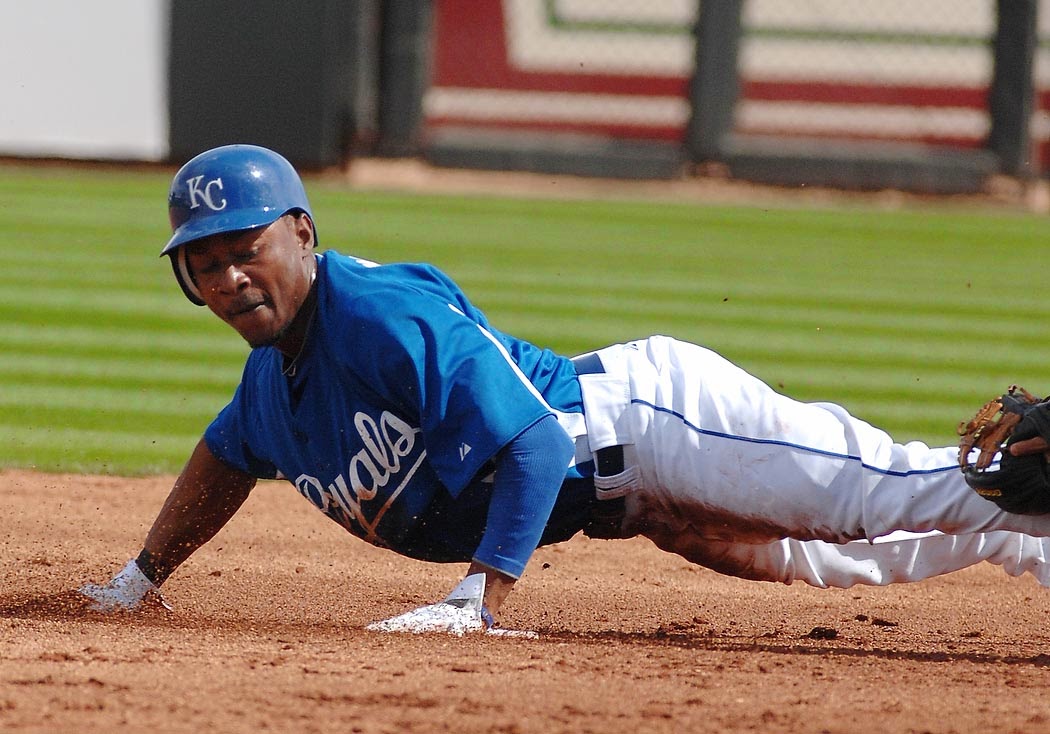 Jarrod Dyson may be a better player than Lorenzo Cain. However,  the Kansas City Royals have invested so much of their time and effort trying to make Cain their regular center fielder and leadoff hitter that they may have become blinded to the guy sitting on their bench. Dyson compares favorably to Cain in almost every category. They are both superior defensive players, Dyson walks more, strikes out less and last year he even showed more power than Cain. Dyson is an excellent player to stash on a bench or to fill a fifth outfielder slot in a deep league. If Lorenzo Cain continues to be injury prone Jarrod Dyson may prove a savvy choice as a sleeper for full-time at-bats. He stole 34 bases last season in just 239 plate appearances and steals are something fantasy owners can always use.

Jarrod Dyson on Royals’ approach: ‘We’re going straight to the playoffs and nobody is stopping it’
Posted by Jon Williams at 7:58 AM No comments:


NEW YORK, NY- (Marketwire - January 14, 2014) - Anthem Media Group Inc., a global leader in operating niche television channels on linear, digital and mobile platforms, announced that the launch of the first ever 24-hour Fantasy Sports TV Network is set for March 4, 2014. The Fantasy Sports Network will begin serving its content on traditional, “over the top”, onlineand mobile video platforms throughout North America, offering interactive fantasy sports programming for a wide range of today's sports enthusiast in a linear stream, as a video on demand service and as an application.
Fantasy Sports Network will be the first TV network to have live studio programming, call in shows, panels, celebrity and expert drafts, reality programming, and on site commentary from sports venues, allspecifically targeted towardsthe estimated 40 million people who play fantasy sports annually and on a daily basis. The channel will engage and involve the fantasy sports community as no media company has ever done before, meeting the analytical, informational and breaking news needs in an entertaining environment.
“This project has been two years in the making, and we are thrilled that it has finally all come together,” said Leonard Asper, President and CEO of Anthem. “We are combining the television experience of the Anthem team with the fantasy sports expertise of Anthem’s Rotoexperts.com, and major partnerships across the industry, to form a unique, compelling and relevant offering for our audience,” he added.
“Through an aggregation of the best fantasy content and personalities in the industry, the Fantasy Sports Network will engage fantasy sports participants and consumers with industry experts, athletes, celebrity personalities and in general be the destination channel for the exploding world of fantasy sports,” said Chad Midgley, VP Content.
“The metrics behind our mission are mind boggling,” said Louis M. Maione, Chief Strategy Officer of the Fantasy Sports Network, "With the fantasy sports industry growing more rapidly and arguably larger than the business of underlying sports themselves, the time to create a multi-faceted media property for this industry is now,” said Maione.
In addition to a daily flagship studio program, Anthem has an agreement with SiriusXM Radio to simulcast three daily hours of the widely popular morning drive-time “RotoExperts in the Morning” program from 6-9 a.m. on the new network. Regarded as the one of the best showcases of fantasy sports information and entertainment in the industry, the morning drive programming on the SiriusXM Fantasy Sports Radio Channel (Sirius Channel 210, XM Channel 87) has aired since the channel’s launch on July 1, 2010 and is hosted by a stable of notable RotoExperts industry stalwarts such as inaugural FSWA Hall of Famer Scott Engel, Adam Ronis, Mark "Dr. Roto" Bloom, Tony Cincotta, Mike Cardano, Lenny Melnick, Drew Dinkmeyer and Mike Leone. Anthem programming partners also include Jon Klein, former President of CNN US and Jeff Gaspin, former Chairman of NBC Universal Television, and the company previously announced that NFL Hall of Famer Chris Doleman has also joined the Anthem group as Executive Vice President of business development.
Several programming and marketing partnerships are being finalized with industry leaders and will be announced in the coming weeks, ensuring a robust programming offering that will engage viewers while providing the necessary information for the “hard core” fantasy sports player.
The network will also be supported by itsflagship fantasy property RotoExperts.com, and its widely popular sports pop culture site SportsGrid.com, both of which were purchased in 2013 from an ownership group led by fantasy sports industry pioneer Louis M. Maione and Abrams Media founder and television personality, Dan Abrams. The two sites feature a number of popular video personalities and a family of notable industry journalists, which will all be cross promoting video content on the Fantasy Sports Network.
“With the growth of this industry exploding as technological advances in interfaces, devices and statistical data aggregation allow players to easily check scores, adjust rosters, interact and communicate from anywhere and on any device, the idea that this could be a 24/7 TV network was a logical progression for us,” said Asper.“It fits perfectly with Anthem’s strategy of building multiplatform media assets around communities of interest, and we will use our other TV properties to promote the network as well”, he concluded.
Anthem Media Group Inc. is a media company with offices and studios in New York, Toronto and Los Angeles, operating niche television channels on linear, digital and mobile platforms globally. In addition to the Fantasy Sports Network, RotoExperts.com, a leader in fantasy sports content, Fight Network, the world's premier combat sports channel now broadcasting in the US and over 30 other countries, and is a significant investor in the Pursuit Channel, one of the top outdoor channels in the U.S. Anthem also owns SportsGrid.com, a leader in general sports entertainment commentary.

Posted by Jon Williams at 11:50 AM No comments:


I think Fister has been underrated the last few years. He did seem to come out of nowhere and excelled with the Detroit Tigers under less than ideal circumstances for a control pitcher. Pitching in front of a defense that at its best did very little to assist the pitching staff, Fister excelled. But he can be even better. His strikeout numbers are no great shakes but the move to the National League should provide a small boost.

Pitching in the National League in front of a far superior defensive team, Fister should see his WHIP drop like a rock. If you still have your doubts about Fister consider this: Of starters with at least 75 innings pitched, Fister's 2.04 ERA is the lowest of any active starter against National League teams according to the Washington Post. I think He's a top 25 starter this season, easy.