The Rise of Francisco Cervelli

Jorge Posada is out for the next few weeks with a hairline fracture in his foot. Posada suffered the injury on Sunday when a foul tip off the bat of Michael Cuddyer struck him on the foot. Top catching prospect Jesus Montero is not quite ready to replace him. The Yankees already have Juan Miranda on the roster and I am positive he will benefit from Posada's absence, but the player that I would grab would be Francisco Cervelli.

Cervelli will not hit for a ton of power or steal any bases. However, he has improving plate discipline, the patience to take walks and low strikeout rates over his career in the majors and minors. He should hit for a strong batting average and by virtue of being in the Yankees lineup will pile up the runs and RBI.

Girardi said he foresees Francisco Cervelli continuing to get the majority of at-bats in place of Posada. Cervelli has already made a good impression this season in his 17 starts, batting .375. He hit .298 last season in two starts.

"Jorge has been a leader," Girardi said. "It's something that we dealt with last year. [Kevin] Cash and [Cervelli] came up big and did a good job, and we're going to need someone else to come in and do a good job for us." 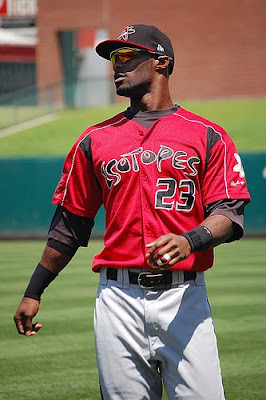 The Kansas City Royals have fired manager Trey Hillman. I believe Hillman was managing the way General Manager Dayton Moore wanted him to manage. Moore wanted this team to win this season using veteran talent rather than continue to rebuild with younger players. If the Royals have reached the point of firing the manager, I hope that they have also seen that the present philosophy used to run the team was not working either.

If you want more on why Hillman is gone read Rany on the Royal's Hillman's Last Stand.

The Royals need to utilize the most talented players on their roster and those are also the younger players. Below are a few players you might expect to see increased playing time with new manager Ned Yost (formerly of the Milwaukee Brewers) at the helm, and one player I have a hunch will make an impact before the end of the season.

Mike Aviles, Shortstop - Avilles is playing a lot now but I expect the Yunisky Betancourt appearances to become less and less frequent.

Kila Ka'aihue, First Baseman - Jose Guillen will not be a member of the Royals' next winning team. Ka'aihue could very well be the starting first baseman or Designated Hitter. He can hit and deserves to play every day.

Alex Gordon, Third Baseman - The Royals need Gordon to be all that he can be even if that is not quite what they may have once hoped. He needs another chance and the Royals have little to lose by giving it to him.

Mitch Maier, Outfielder - Maier has the ability to hit 10-12 homers and steal 10-15 bases over a full season in the majors.

Hechavarria makes pro debut tonight
The much anticipated professional debut for highly touted Cuban shortstop prospect Adeiny Hechavarria will be made on Friday night for Dunedin as the Blue Jays take on the FSL North Division leading Clearwater Threshers at 7 p.m. at Dunedin Stadium. Hechavarria is expected to be with Dunedin for a short while before seeing time at Double-A New Hampshire. His play with the Fishercats will then dictate his path to the Major Leagues either with a September call-up this year or a shot at the shortstop job in 2011.

Casper Wells Recalled By Detroit Tigers
The Detroit Tigers today recalled the contract of outfielder Casper Wells from Triple-A Toledo and optioned the contract of right-handed pitcher Alfredo Figaro to Toledo. Wells will be in uniform tonight for the Tigers against the visiting Red Sox, wearing No. 57. Wells was batting .203 with a team-leading five home runs (tied with Jeff Larish) in 31 games for the Mud Hens. The 25-year-old is a Grand Rapids native. (From Tiger Tales: Billfer explains how he thinks the roster will shake out at Detroit Tigers Weblog and I agree with his thinking. Wells will likely replace Alfredo Figaro on the roster tonight. He then may return to Toledo on Sunday if Armando Galarraga is recalled to start a game. This would prevent Jeremy Bonderman or Rick Porcello from pitching on three days rest.)

Boras: Hank Blalock - promote him or let him become free agent!
Agent Scott Boras indicated Tuesday that Blalock would activate the out clause in his Triple-A contract within the next week, forcing the Rays to either promote him to the big-league team or allow him to become a free agent and sign elsewhere. Blalock, 29, has been sizzling at Durham, with an International League-leading .366 average plus four homers, 23 RBIs (in 24 games) and a .959 OPS, while playing third base regularly.

Cameron expects offseason surgery inevitable
Rehabbing Red Sox outfielder Mike Cameron believes that even if he can make it back on the field through simple rehab of his sports hernia, he'll still undergo postseason surgery to correct the problem. While immediate surgery seems to be ruled out, and Cameron told the Providence Journal he could return to the Sox Monday, the outfielder indicated that he is still in significant pain from the injury, which he believes he initially suffered during spring training.

Fractured tibia lands Young on shelf
Eric Young, Jr. never made it to the dugout. He reported to Coors Field with a lump in the middle of his right tibia and was sent to a local hospital, where x-rays revealed a stress fracture. Young sustained the injury while awkwardly rounding first base in the seventh inning of Thursday's game. He continued to play before complaining of soreness in the ninth inning.

Photo from fOTOGLIF
Posted by Jon Williams at 3:47 PM No comments:

The Society for American Baseball Research (SABR) is pleased to to offer the Emerald Guide to Baseball 2010 as a free PDF to the world baseball community.

Edited by accomplished and acclaimed baseball historians Gary Gillette and Pete Palmer with Rod Nelson and Ted Turocy and published by SABR, The Emerald Guide distills the 2009 season down to 570 fact-filled pages that contain the pitching, fielding, and hitting statistics for every player active in the major and minor leagues in 2009. A bound version is available via print on demand at Lulu.com for $24.95. Every page in the bound edition is in the PDF.

Go to this link for your FREE PDF.
Posted by Jon Williams at 6:42 PM No comments:

Posted by Jon Williams at 3:57 AM No comments: