The Rise of Francisco Cervelli

Jorge Posada is out for the next few weeks with a hairline fracture in his foot. Posada suffered the injury on Sunday when a foul tip off the bat of Michael Cuddyer struck him on the foot. Top catching prospect Jesus Montero is not quite ready to replace him. The Yankees already have Juan Miranda on the roster and I am positive he will benefit from Posada's absence, but the player that I would grab would be Francisco Cervelli.

Cervelli will not hit for a ton of power or steal any bases. However, he has improving plate discipline, the patience to take walks and low strikeout rates over his career in the majors and minors. He should hit for a strong batting average and by virtue of being in the Yankees lineup will pile up the runs and RBI.

Girardi said he foresees Francisco Cervelli continuing to get the majority of at-bats in place of Posada. Cervelli has already made a good impression this season in his 17 starts, batting .375. He hit .298 last season in two starts.

"Jorge has been a leader," Girardi said. "It's something that we dealt with last year. [Kevin] Cash and [Cervelli] came up big and did a good job, and we're going to need someone else to come in and do a good job for us."

Posted by Jon Williams at 10:14 AM No comments: 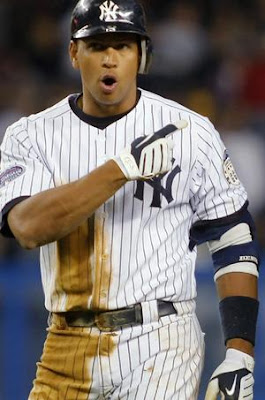 If you are a Yankees fan, you are used to seeing the team bashed as if they a dimwit with an unlimited credit card ran the team. Nevertheless, the fact is this is one of the best-managed teams in sports. They should be a model for other teams rather than just the envy of them. They have a very deep farm system. Although not filled with many elite prospects, the depth of B and C prospects is impressive. The vast majority of those prospects are pitchers. The Yankees recognize that nothing is more valuable or more difficult to acquire than pitching. After years known as an organization that would not give a rookie a chance – they are successfully integrating youngsters onto the team on a regular basis. Then they use the savings that these young players provide, and the massive revenue (that years of winning and good business bolstered) to sign the very best players available.

Last year the very best players were CC Sabathia, A.J. Burnett, Andy Pettitte, and Mark Teixeira. It should be noted that these players took the roster spots of players whose massive contracts had finally expired – Jason Giambi, Bobby Abreu, Carl Pavano, and so forth. The depth in the system had also made trades for Nick Swisher, Damaso Marte, and Xavier Nady possible. Now that depth may result in the acquisition of Roy Halladay and the level of hatred for all things Yankees would certainly reach new heights. However, it makes some sense. George King of the New York Post calls the Yankees and Red Sox favorites for Halladay because of their ability to part with major league ready talent (or close enough) and to provide Halladay with the Sabathia-like contract he is certain to demand.

Meanwhile, the Yankees could be losing two key players to free agency. Johnny Damon, Hideki Matsui, and Andy Pettitte are free agents. Pettitte is not as likely to leave for another team, as he is to retire. However, Damon and Matsui look like prime targets for teams seeking outfielders but unwilling or unable to meet the contract demands of players like Matt Holliday and Jason Bay. Ironically, if the Yankees do lose both Damon and Matsui, it increases the chance that they will go after a Holliday or a Bay. Despite their willingness to include young players in the mix, it is unlikely that the Yankees would go into the season with Nick Swisher, Brett Gardner, and Melkey Cabrera starting in the outfield.

Alex Rodriguez, 3B
After Alex Rodriguez’s gutsy season, he has won quite a bit of respect from me. After a pre-season that included accusations of (and later admitting) PED use, a tell-all book from Selena Roberts, and surgery to repair a muscle tear in his hip, I had no faith that A-Rod would perform. But he did. He had some help. Derek Jeter turning back the clock and Mark Teixeira providing an MVP quality season took away much of the unwanted attention. For the first time since coming to New York, Rodriguez just played baseball. In just 124 games, he managed to hit 30 homers and collect 100 RBI.

However, there are still some questions to answer. Does he need further surgery on his hip and how will that affect his play offensively and defensively? Do you believe his story about quitting PED use after the 2003 season? If not, how will he react? If he is only stopping their use now, how much will his performance degrade? Right now, I am willing to give him the benefit of the doubt. I believe many players stopped their PED use after the 2003 season with serious testing implemented. There are many rumors that A-Rod may not even need the more invasive version of the hip surgery. In any case, Chase Utley’s season provides a ton of reasons to hope for the best. I think A-Rod belongs back in the first round. He needs to prove some things before he returns to the Top 5, but Top 10 is a lock.

Phil Hughes, RHP and Joba Chamberlain, RHP
After the General Manager meetings, the New York media swarmed onto GM Brian Cashman with questions about the direction the team would take in 2010. One of the revelations was that Cashman and the Yankees had not yet made a decision about the starting/relieving status of either Joba Chamberlain or Phil Hughes. Cashman indicated that he thought of both players as starters who could also pitch in relief. Both will be part of a large group of starting candidates in Spring Training. The acquisition of Roy Halladay would almost certainly cost the Yankees one of the two pitchers. In that scenario, I believe that the remaining young player would be in the rotation with Sabathia, Burnett, Halladay, and Chien-Ming Wang or Andy Pettitte.

Phil Hughes had a great season for the Yankees. Fans tend to forget just how highly the Yankees think of Phil Hughes. When Wang went down to injury, Hughes stepped up and performed in the rotation. He was not untouchable as a starter but his talent was on obvious display and it would have been nice to see him stay there. However, when Wang returned (it was a short-lived return) Hughes campaigned to stay and pitch in the bullpen. He not only pitched well there but he may have been the MVP of the pitching staff by bridging the gap between the starters and Mariano Rivera.

Hughes finished the season with excellent fantasy stats including an 8-3 record, 3 saves (3BS), 3.03 ERA (3.22 FIP), 1.12 WHIP, and 10.05 K9. Looking a little deeper, Hughes had solid control (2.93 BB9), kept the ball in the park (0.84 HR9) – the Homerun rate may look on the lucky side but he has been displaying that ability his entire career despite being a flyball pitcher. One of the skills that Hughes seems to have is inducing infield flyballs, which obviously do much less damage than the other sort does. Hughes did not seem to have his previously excellent curveball this season. However, in the bullpen it wasn’t needed. His fastball was excellent and his cutter was a solid pitch. If Hughes can rediscover his curve I believe he will be an excellent starter and is worthy of fantasy consideration. If only one of the two is in the rotation, I believe it will be Hughes.

Joba Chamberlain seems to pitch better in the bullpen because he does not attempt to conserve his energy to make it through multiple innings. However, that is not the only reason he looked better as a reliever in 2009. In the first half of the 2009 season, Chamberlain pitched like an average major league starter (with excellent potential) which is just fine for a young player in his first season in a major league rotation. It is even more impressive when you consider that Chamberlain spent just one season in the minors has pitched just 364.3 innings since being drafted. Even for a college player that is a miniscule amount. Now consider that this young and inexperienced pitcher was skipped whenever it was possible in the first half as part of the attempt to limit his innings. Then in the second half, the Yankees hit on a plan to give him 8-10 days between starts. This quickly proved to be a disastrous idea. The Yankees adjusted the plan to allowing him to pitch regularly in the rotation but with a ridiculously low pitch count that made it difficult for Joba to escape even the third inning. The second half was a disaster.

Chamberlain has excellent stuff and if he works on developing his other pitches, he can be a very good starter. There is little point in going into the numbers. He was below average and way off his previous career marks in almost every category. The Yankees still see Chamberlain as a starter but they may not have a spot for him in the rotation in 2010. He will have to earn it. Keeper League owners whose rosters allow Joba to be benched indefinitely should definitely consider holding onto him. With experience, Joba still projects to be an impressive pitcher. However, those in year-to-year leagues are cautioned to avoid Chamberlain as a starter. He will experience ups and down consistent with young pitchers. If Chamberlain in a reliever he should be treated as a very good set-up reliever and next in line for saves should anything happen to Mariano Rivera (knock on wood). In fact he should probably be considered next in line even if he spends the season starting.

David Robertson, RHP
The most underrated player on the Yankees is probably David Robertson. Illustrated beautifully by the way manager Joe Girardi ignored him during the playoffs. Despite a high walk rate (4.74), Robertson earned a 3.30 ERA and 3.05 FIP. He seems to strikeout batters (12.98 K9) almost at will and despite being a groundball pitcher he keeps the ball in the park, which looked like quite the feat at times this season. He has the stuff to close and probably should become next in line for saves should Joba be established as a starter when Rivera retires.

Francisco Cervelli, C
It is strange the way the Yankees have used Cervelli. He played at four different levels in 2008 and then played at four different levels again in 2009. The Yankees obviously like him as a defensive catcher and he looks like the favorite to backup to Jorge Posada in 2010. Posada is bad enough defensively that I can easily see the Yankees giving Posada lots of at-bats at designated hitter, especially if they do not re-sign Hideki Matsui. If that happens, I believe that Cervelli would make a fine one-dollar catcher. However, this is where the Yankees strange usage makes it hard to predict what he’s capable of doing with consistent at-bats. I think he will make solid contact and hit for a good average but without any real power. Batting in the Yankees lineup on a regular basis should be good for his Run and RBI totals, making him of use in AL-only leagues.