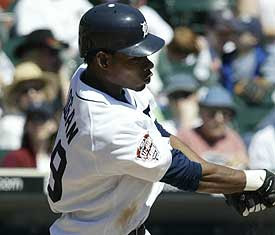 Nook Logan isn't a great hitter but he has already been named the starting center fielder for the Washington Nationals. In his career he has batted .270/.319/.347 in 545 at-bats. Most of those at-bats were accumulated as a part-time player but he still managed to steal 33 bases while being caught just nine times. He could easily steal 40-50 in a full-time role as in the minors he had season totals of 22, 53, 67, 55, 37 and 46.

Take him late in your drafts or auctions and you could have a major bargain on your hands.

powered by performancing firefox
Posted by Jon Williams at 4:10 PM No comments: 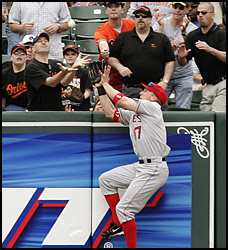 Darin Erstad is a player that any serious baseball fan knows. Erstad is the guy that might be a decent player if he could only stay on the field. His heart is huge but his tendency to run into walls and such has kept him from having an impact on the field for the majority of the last few seasons. Kenny Williams brought him into the White Sox fold this winter when the Los Angeles Angels decided not to offer him a contract.

One of the things I preach that most so-called experts counsel against is drafting the injury prone guys while they are healthy. A guy like Erstad who in a full season of at-bats could put up stats worth anywhere from $20 to $30 will be available at a huge discount. From all reports Erstad is one hundred percent healthy as spring training starts. At present he is projected to be the fourth outfielder for the White Sox behind Scott Podsednik, who has injury issues of his own as well as a slipping performance level, and Brian Anderson, a young player who was very disappointing in 2006. I'm betting that in most AL-only leagues Erstad will be available at less than ten bucks. At that price you should grab him as your fourth or fifth outfielder.
Ozzie Guillen has vowed to get back to Ozzieball this season. A big part of Ozzie's game is the stolen base. Erstad coming off the bench for say 220 at-bats could grab you 10-15 stolen bases, hit for a decent average and maybe toss in a few homers to boot. For a single digit price I'd take that in two seconds. The extra-added bonus is at less than ten bucks he should be fairly replaceable even in deep leagues.

Grab Erstad cheap or in the late rounds of your draft. I don't think you'll regret it.


powered by performancing firefox
Posted by Jon Williams at 10:41 AM 2 comments:

Chris Ray has a projected 54 BPV as of this writing on the Baseball HQ website. Such a low projection may cause HQ subscribers to greatly downgrade him.

In an article that will appear on this site soon I discuss some reasons you may not win as much as you might. One of those reasons is an over reliance on a particular source. The point being that many fantasy owners choose to adopt the philosophies pf a particular book or website and just take their word for things. On Baseball HQ this week Doug Dennis in an article called Bullpen Buyers Guide (premium) he lumps Baltimore Orioles reliever Chris Ray into a group labeled fluke alongside names like Joey Devine, David Weathers, Armando Benitez, Joe Borowski and Seth McClung. Without getting into the others on the list I want to take a look at Chris Ray and show you how the blind adaptation of a site's philosophies can cause you to lose out on valuable players.

Right off the bat I want to share that I have subscribed to Baseball HQ for years and have spent much money on their products. I do not think you can find a more professional or respected source for fantasy related information. But they do have some flaws that can leave holes in your game but therefore also avenues to exploit if you have subcribers in your league.

Chris Ray is the 25 year-old closer for the Baltimore Orioles. Ray may not have a long resume but has been an extremely solid reliever throughout his professional career. The 2006 season began with Ray installed as the closer for the Orioles and with the exception of a brief blip mid-season He was stellar for the entire season and collected the following stats: 66 IP, 45 hits, 27 walks and 51 strikeouts. Now, what HQ doesn't like is his hit-rate. HQ hates anything that they can't explain statistically and since their present doctrine dictates that BABIP is something that a pitcher cannot control any pitcher who performs far better than average is labeled a fluke. Barry Zito is downgraded on their site for the same reason. But if you look at Ray's career stats you'll see that he has always had the SKILL to limit BABIP. I'm not slamming HQ for this way of rating players. They nail far more players than they miss but nevertheless this represents a hole in the HQ rankings that can be exploited in HQ heavy leagues. Look for players with such a track record and you will find fantasy baseball bargains.
Posted by Jon Williams at 11:15 AM No comments: