Once again Brett Farve is not going to be a part of the Green Bay Packers' offense. They must really have a lot of faith in Aaron Rodgers. Almost makes you want to bump him up your rankings... Rumors are pointing towards a trade to the Vikings. 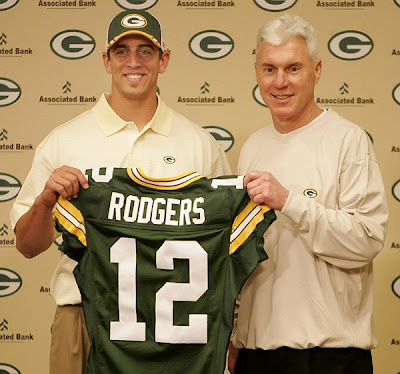 Jay Glazer of FOX Sports reports that QB Brett Favre is less likely to return to Green Bay. In Monday's meeting between Favre, GM Ted Thompson and HC Mike McCarthy, Favre insisted he wanted to do what is best for the team and the locker room and did not want to become more of a distraction. That also included canceling any kind of quarterback competition, meaning Aaron Rodgers will remain the starter. Favre did maintain his desire to play, and play within the division, but the Packers are scratching to find another solution. The two sides will meet again today.

Posted by Jon Williams at 8:01 PM No comments:

Head over to RotoExperts and read the latest edition of Moving Up, Moving Down. Here's a brief excerpt from last week's column:

It was not exactly an intervention. It was more like a State of the Union address, though instead of telling Congress what they wanted to hear, I was giving the members of my various fantasy squads a chance to praise, criticize, and berate each other as well as me. I have to admit, it's much more fun that way. A quick look around the room assured me that everyone I had invited (and a few I had made a point of not inviting) had arrived.
Robinson Cano
Robinson is part of the red hot Yankees. Photo Credit: DANNYWILD

Just as I was about to get things started one of those uninvited guests made a beeline to the podium. It was Robinson Cano, and he had a very smug look on his face.

“Hah! You told people to dump me but I’m having a great second half!”

“Congratulations Robbie. I’m very happy to have been wrong about you.”

“Why, I’m not on any of your teams. You know, since the All-Star break I’m batting .514 with three home runs and ten RBI.”

Jon: "Yes, Robbie. I was clearly wrong to suggest people dump you.”
Posted by Jon Williams at 6:28 PM No comments: