Over at The Hardball Times, Nick Fleder posted an article ranking his and two other writers' top 25 under age 25 Dynasty League Players. Several readers commented their surprise that all three writers had placed Stephen Strasburg ahead of Clayton Kershaw. The writer argued that Strasburg's upside was better than Kershaw's in the long term, and further suggesting that the 2011 season was as good as it would get for Kershaw. I wondered if this was true.

Strasburg in my mind has higher upside that Kershaw. Yes, Clayton is incredible, but I doubt he’ll ever improve on his 2011 season, and he might regress a bit, where Strasburg might be able to pull several Kershaw 2011s, or potentially a better season. Higher K upside, similar WHIP upside, and as good a shot to put up 20 wins per year on the offensively-adept Nationals. I’ll back this up with some more numbers a little later. The case, I readily concede, can be made that Kershaw could be #1. Stanton, Harper, I’d argue vehemently, shouldn’t be in consideration for the top spot.

To tease us, the Nationals brought back Strasburg for a five-start stretch that saw him post a 9.0 strikeout-per-nine rate and two walks. That’s two walks, period! His FIP in this vacuum was an unbelievable 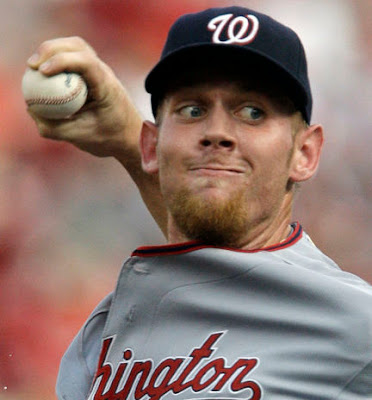 1.28. To go along with those ridiculous stats, he was also the best pitcher in the game from the moment he made start number one to the end of the 2011 season.

That combined with what I’ve seen as far as skills, pedigree, and scouting grade makes him the most valuable keeper prospect I’ve seen in years if not ever. I love Kershaw. I have him as my number one starter next year. I also think that Kershaw should outperform Strasburg in 2012. But as a “Keeper”, Strasburg will dominate this list, health-permitting, for 2013 and beyond.

I think we can all agree, both starters are incredibly desirable in keeper/dynasty formats. In general, I tend to slant toward hitters in these formats over pitchers, and in submitting my rankings to Nick, mentioned that it physically pained me to include three pitchers in the top 4. That said, those pitchers are tremendous.

With that in mind, if I’m going to start a dynasty league roster with a pitcher, I’m shooting the moon. Someone addressed Strasburg’s conditioning above, and that is an issue of the past, as another reader was quick to point out. As far as mechanics go, I’m beginning to believe mechanics experts may not know their… from a a hole in the ground. Obviously, it is probably better for a pitcher to have a low effort delivery than a high effort one. Beyond that, I’m starting to lean in the direction of some pitchers being built to pile up innings, and other not. So far, Kershaw has shown the skill and good fortune of remaining healthy to rack up innings pitched, and Strasburg has not. But, I don’t think that means there is no risk of Kershaw breaking down. Pitching is inherently bad for the shoulder/arm/elbow.

When both pitchers are healthy, there is no argument that Strasburg has been the better pitcher. Yes, he has just 7 starts under his belt, but in those seven starts he has been better in all three facets of controllable pitcher skills. His K/9 is nearly two full batters higher than Kershaw’s in his career, and more impressively, his K% is 6.6% better. Kershaw has made strides in both marks, but still lags behind Strasburg. Kershaw also trails Strasburg in walk rate, and ground ball rate. Kershaw had his best walk rate by a wide margin this year, but it was also his first year below 3.50 BB/9. Maybe he’ll sustain that, but maybe he won’t. Comparatively, Strasburg’s walk rate in his healthy rookie debut was 2.25 BB/9, and was better post Tommy John surgery at 0.75 BB/9 (which is not sustainable).

The potentially bigger gap could come in groundball rate. Prior to his injury, Strasburg sported a 47.8 percent groudball rate. Post surgery he had a flyball centric approach, so there are questions about where he’ll land on that spectrum. At this point in Kershaw’s career, though, it looks like his groundball rate is safe to project in the low-40 percent range (was up to 43.2 percent in 2011, a mark that was better than those in 2009 and 2010).

All-in-all, the total package favors Strasburg. To neglect to acknowledge there is a health risk attached to him would be wrong, but just how much greater is that risk that Kershaw? I’m not sure that can be quantified, plenty of pitchers have returned from TJ and not had further health issues. The biggest question for me was answered when he got back to the big leagues this past season.

It has been a long time since a pitcher has come along with as much build-up as Stephen Strasburg. By the time he left San Diego State University most baseballs fans (not to mention prospect gurus) were already drooling over his potential. He was the number one overall pick and his last minute signing by the Washington Nationals was considered a triumphant success for the organization and it's new general manager, Mike Rizzo.

Clayton Kershaw was the 7th overall pick of the 2006 Amateur Draft. After just two seasons in the minors, Kershaw was called up to the majors on May 25th of the 2008 season. He has never been anything but a huge success for the Los Angeles Dodgers. He has improved in every season as a major leaguer going from promising prospect to Cy Young Award winner before his 24th birthday.

Kershaw is just a few months older than Strasburg but already has three full seasons and a Cy Young award to his credit. Winning the Cy Young does not necessarily make you the better pitcher in Major League Baseball or Fantasy Baseball but it is a major point of success. At essentially the same age as Kershaw, Strasburg has missed a year due to Tommy John Surgery and has a total of just 256 professional innings. Kershaw has over a thousand professional innings including 716 in the majors.

The National's promising ace is hurt in this debate by the small sample sizes in his performance. Strasburg has less than a hundred innings in the majors and although his 68 and 24 inning samples have been spectacular, he is far from the first pitcher to look great in such a small sample. At the moment we have no idea if Strasburg is durable enough to make it through an entire season in the major leagues with starts every fifth day. Kershaw has done this three times already, increasing his strength and durability each season while also improving his performance.

In the majors thus far Strasburg has 92 innings in 17 starts. He has strong performance indicators with an 11.35 K9, 1.86 BB9, 45 percent groundball rate, and a 2.14 xFIP. This stellar performance and the glowing scouting reports are what the THT writers are speculating on when they rank him ahead of Kershaw. If Strasburg could maintain numbers like that for 134 more innings he would have roughly Kershaw's 2011 season. But with the ebb and flow of a major league season, it is extremely hard to believe that the inexperienced Strasburg is ready to pitch at a Cy Young Award level for 200-plus innings.

Despite all this the question that needs to be answered is what will happen from this point forward. Kershaw has improved his IP, K9, BB9, GB%, and xFIP in each of the last three seasons and at just 23 years old is not yet considered in his peak performance years. Most pitchers his age are still in the minors. There is no reason to think that Kershaw has reached a plateau nor that he cannot continue to improve. In Kershaw we have a young left-handed ace that should continue to pitch at a Cy Young worthy level for many years assuming he can maintain his current durability.

Strasburg had a great college career and blew through the minors about as fast as it can be done if the pitcher's organization is serious about seeing him succeed at every level and the Nationals were. He sandwiched two great (but short) performances around an elbow injury and Tommy John Surgery. In those short stints, Strasburg was every bit as good as Kershaw was in his Cy Young season, maybe even better. His future depends on staying healthy and being able to make adjustments as great major league hitters learn his stuff. The odds of him staying healthy? I'll call it even. The odds of him making the necessary adjustments? Pretty damn good, I'd say.

Choosing between the two is largely a question of how much risk you enjoy taking with your fantasy team. Kershaw and Strasburg reached their current levels in different fashions but the end result is an ace starter (Kershaw) and a potential ace (Strasburg). They can both probably pitch at a Cy Young level for several years if they stay healthy. The risk in this regard is far higher with Strasburg than with Kershaw. In my opinion picking Strasburg over Kershaw at this point is mostly about wanting to have that huge name achieve greatness for the first time on your roster. It is the same thing that makes some owners over reach for rookies, Japanese imports and whatever hot name comes along. The difference in talent is not as huge as the hype might lead you to believe. The pick here is obviously Kershaw, this is based almost entirely on avoiding risk.
Posted by Jon Williams at 3:17 PM No comments: