Originally written for Big Leagues Magazine Before the start of the 2013 season.

The worst thing you can do going into a fantasy draft or auction you plan to dominate is to go in without a plan. A plan gives your draft day efforts a structure. Your plan should build towards the goal of bringing you a fantasy baseball championship. Without a plan you will make more mistakes on Draft Day. You will choose the wrong players and miss your statistical goals. You can know the player pool as well as anyone but in a competitive league you will lose without a plan. If you have no idea how to put together an effective plan, this is your lucky day.


Build Around Your League Rules

Every draft advice column seems to remind owners to check their league rules. You see it so often because it is of vital importance to winning a league. Slight variations in league rules can cause drastic changes to the value of a given player. Adam Dunn may be just a later round’s consideration in a typical league but in a league that replaces AVG with OBP he becomes a much more important player. In a Head 2 Head league, drafting a balanced team is much less important than in a standard Rotisserie League. In other leagues starting pitchers may be the most important players available. In a 10-team mixed league that drafts just three outfielders per team, outfielders are plentiful. In an AL-only league with 13 teams, that is not the case. Study your league rules and measure the impact those rules will have on your play. Imputing your data into draft day software like RotoLab can make the job much simpler.


Establish and Build Toward Your Goals

My goal is always to win and it never changes. Not every owner likes to play that way, particularly in keeper leagues. Some owners like to rebuild with cheap keepers and minor leaguers until they have a team they feel can win several seasons in a row. In re-draft leagues, I have known owners to build rosters with quirky handicaps such as all lefty pitchers, an All-Visa Team, and no player over 27-years old. Your goal for the draft should match your goals for the season. If you just want to have fun, a quirky draft goal is just fine, but if the goal is to win, save the quirky ideas for a different league.

Whatever your goal, it is important that you commit to that goal for as long as possible. If your goal changes more often than necessary, it will worsen your chances of achieving anything. But there are times during the season when you may have to re-work your season goals. You may decide that you cannot finish first at some point. At that point depending on your position in the standings and the composition of your roster, you might decide that finishing in the money while setting up for 2014 is a more attainable goal. Others may decide to dump their present assets and enter a re-building mode. I am on record saying that re-building is for wussies but there comes a time during a season where setting up for the following season becomes the best option.

Your keepers should always fit your overall plans. If they do not fit your plan, you may want to come up with a new plan (or at least trade for players that do fit). You should always rank your potential keepers in the order in which they can help your winning strategy. If you plan to focus on high-average, power hitters to complement your cheap (but great) starting pitching, an “at-value” Prince Fielder is probably a better keeper than your slightly underpriced Garrett Jones. You want your keepers to work with your strengths not against them. Your great starting pitching is less effective if you also keep your one dollar Carlos Zambrano because he used to be your favorite Cubs starter.

Now, just because your primary strategy is built on high-average, power hitters and great starting pitchers, that does not mean that you should toss back your $10 Jean Segura. Segura may not hit for power or much of a batting average, but his indicators suggest his average will not be a negative and his steals potential may make it much easier for you to concentrate on the power hitters during the draft. The same cannot be said about your $15 Everth Cabrera who may steal a ton of bases, but has the potential to pull down your team batting average. It may be possible to account for this drag but a better idea is to trade for a player or players that better fit your strategy. Andrelton Simmons may cost you five extra bucks but also saves you the hassle of trying to balance a bad BA player before the draft even starts.

You also need to study the rosters of your competitors. You should have your best guess at the keepers on the other teams before deciding on yours. This is important because keepers can take a huge chunk out of the potential player pool on several levels. You could find that certain positions are going to be extremely scarce on Draft Day. If ten of the 15 potential closers in your 12-team league are held by the owners of just six teams buying a closer at the draft could get expensive. That might make your $18 Rafael Betancourt a better keeper than you originally supposed. The players you should target should be the players that will help you win. Values and profits are very important but the way they fit into your draft strategy is just as important.

After your league’s keepers have been calculated to the best of your ability, it is time to study the player pool in depth. You need to know what positions remain to be filled on every team’s roster. How many catchers, first basemen, second basemen and so forth will be needed to fill each open spot? In deeper leagues there could be more spots than acceptable players. Understanding the depth available (or not available) at each position will help you prepare a strategy that accounts for positions that may be short on talent. In addition to finding where the talent shortages are, you also want to find where (if anywhere) there might be abundance.
You should be able to find some bargains within the talent abundant positions that make nice targets for your draft plan. Bargains are important because with a limited budget you need to acquire as much talent as possible. The bargains also give you the extra budget to afford expensive superstars. Where there is scarce talent, you will have to prepare to pay a premium. Draft inflation can cause even the bottom tier of talent at scarce positions to cost much more than the value of their stats. Because of this, you are sometimes better off paying for the better talents available at thin positions.

The typical strategy here is to plan on finishing third in each category. That is nice. If you meet those goals you will probably field a competitive team with a decent shot at winning. Personally, I advise a more aggressive strategy. Plan to finish first in each category. You probably will not, but that is not the point. The point is to force you to draft not just solid performers, but also more players with upside. Marco Scutaro is a fine player who will help a lot of fantasy teams this year. However, if for the same draft day cost you could draft Jedd Gyorko you may want to consider going with the talented rookie with upside. It does not need to be just rookies either. Assume you have had a fine draft and are entering the dollars days’ portion of the auction. You could be considering names like Delmon Young and Chris Heisey, solid players who should get some playing time. But also available is Jordany Valdespin who is not as established but has a full-time starting opportunity and a minor league record that indicates he has the potential for 15 homers and 20-plus stolen bases with a decent batting average.


The Heart of Your Plan is in the Roster Design

You should choose some player targets at their projected costs whether in auction dollars or draft rounds. Experimenting with various team compositions can help you shape your draft strategy. There are the standard draft plans such as Stars and Scrubs, Spread the Risk, The LIMA Plan, Portfolio 3 and the Mayberry Plan (a web search will provide all the details you need on all of these ideas) and hundreds of plans devised by experienced owners that have no names. But no matter what plan you use to design your eventual roster, you are essentially deciding how many of the following player types you need to roster.
It cannot be stressed enough how important it is to have a well-thought-out plan for Draft Day. Executing that plan can be difficult as other owners are certain to covet some of the same players and force you to either pay more or alter your strategies. Consider various options for every component of your plan and the odds of things going drastically wrong shrink. Going into draft day without a plan is planning to fail.
Posted by Jon Williams at 11:47 PM No comments: 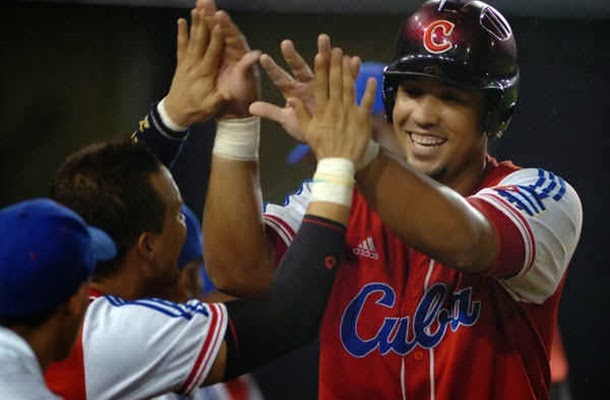 Cuban first baseman Jose Abreu has been so impressive playing for the Cuban National Team that when he officially declared a MLB free agent every team in baseball sent someone to see him in his various showcases. These were teams that had obvious needs at first base and/or designated hitter as well as teams that had the positions well filled. The obviously strong interest was fueled even further by teams in need of a power bat that could not afford to part with a top draft pick to sign free agents who received a qualifying offer.

Despite all the interest the scouting reports on Abreu have skewed a bit negative. Most of them seem to focus on the report from Baseball America which states that Abreu seemed to struggle against quality fastballs located on the inner third of the plate. This is a weakness that many major leaguers have and one that does not necessarily destroy his potential as a high average masher. He may certainly struggle against the frontline starters with impeccable control but doesn’t everyone? Many major league starters struggle to consistently locate their fastballs. Abreu could also be coached to take a half step away from the plate.

I think it is helpful to note that several teams were involved in the bidding. Depending on which reports you buy into it is possible that as many as seven teams bid more than 50 million for Abreu. Those teams seem to include organizations such as the Boston Red Sox, Texas Rangers and Houston Astros – organizations that at this point we should have learned to trust when it comes to scouting and player evaluation.

I first heard of Abreu when I saw Clay Davenport’s Cuban Player Translations. Take a look at these stats and I think you will be quite impressed. Clay Davenport of course one of the best analyst in the business and his translations well worth your attention.

What should be emphasized from almost every report is that Abreu despite average bat speed, has advanced hitting skills and tremendous power. I fully expect him to hit for a quality batting average and above average power as he adjusts to the majors. The hype created by previous Cuban imports like Yoanis Cespedes and Yasier Puig not only fed into the free agent frenzy but will also drive up his fantasy cost this coming season. I will be a buyer as long as the price stays reasonable. If he costs the same as other established power hitters I’d rather have one of them then the newbie, wouldn’t you?
Posted by Jon Williams at 8:34 AM No comments: