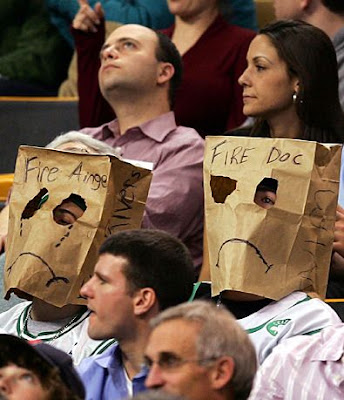 A few days ago I had a serious bone to pick with Bill Simmons. Simmons, in his in Sports Guy column in ESPN the Magazine had declared Kevin Garnett NOT CLUTCH. I thought he was wrong but I've come to realize he was right. None of the present Celtics are clutch. None of the so-called Big Three wants to take open mid-range jumpers. They seem to prefer passing into a crowd to taking the open shot.

This together with Doc Rivers continuing to make stupid decisions concerning the bench and game planning has led to the Celtics taking another 2-2 record into game five.

Tim Darga give the minutes if the game on the Slam Magazine website beware he is an obvious Celtic Hater.
Posted by Jon Williams at 2:37 PM No comments:

I am now a member of the Fantasy Sports Writers Association. Whoooo Hoooo!
Posted by Jon Williams at 4:35 PM No comments: 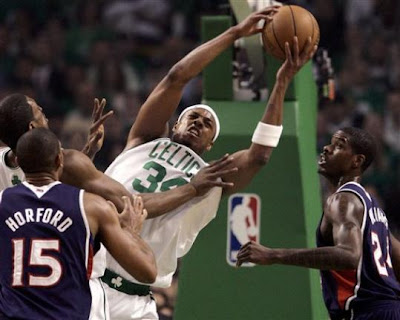 Can the Boston Celtics be any more disappointing than they have been throughout the playoffs? I thought the series against the Atlanta Hawks was just a fluke but I no longer believe that to be the case. The symptoms of the problem have been present the entire season and particularly in the playoffs against not just the Hawks but also against the Cleveland Cavaliers and Detroit Pistons. Doc Rivers must be replaced. Here are the three primary symptoms that have led me to this conclusion:

Posted by Jon Williams at 2:46 PM No comments: 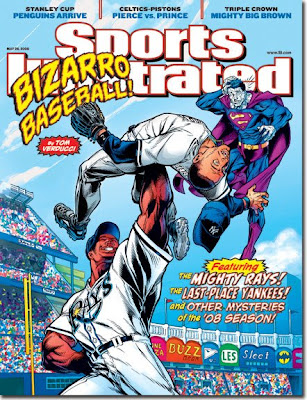 Posted by Jon Williams at 4:58 PM No comments: 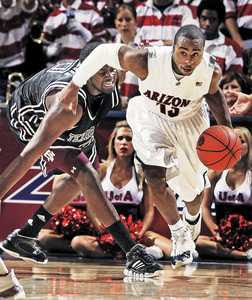 The Chicago Bulls have won the right to choose between point guard Derrick Rose and power forward Michael Beasley. I'm not sure the Bulls actually need either player to win in the 2008-09 season. I was actually hoping that the new York Knicks (not my favorite team but up there) would win either the first or second pick to give them a chance at Rose but I guess that is not to be at this point.

Jeff Fox has over at Slam Online already has a Mock NBA Draft article up. Check out the entire article here but I've borrowed the Knick passage for your brief enjoyment:

Posted by Jon Williams at 2:59 PM No comments: 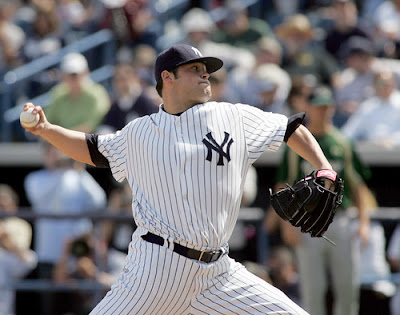 Joba Chamberlain has officially begun his conversion from shut-down set-up man to starter. The question fantasy owners (and the New York Yankees) have to be wondering is whether or not he can maintain his dominance pitching in the rotation every five days or so. The answer from this corner is yes.

Joba has a good collection of pitches including a fastball that tops out in the high nineties, a nearly unhittable slider, an above average change-up and a plus curve that may have a bit of rust on it at this point but it is more than just his arsenal. The better a pitcher is the more innings you want and need him to throw. Relief pitchers are easy to find if you try and the Yankees have several that only need an opportunity. Edwar Ramirez can do the job in the eighth inning and a large collection of the Yankees minor leaguers can also do the job. 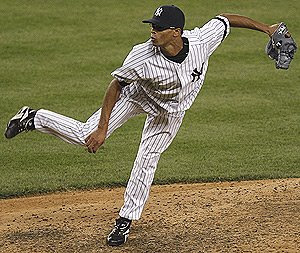 Joba Chamberlain is going to be three times as valuable as a starter than he is as a reliever. if you don't own him and the owner who does doesn't have the same faith make him a strong offer. You won't regret it.
Posted by Jon Williams at 1:28 PM No comments: 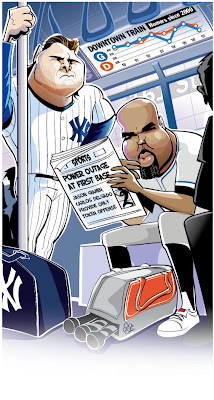 Posted by Jon Williams at 4:10 PM No comments: 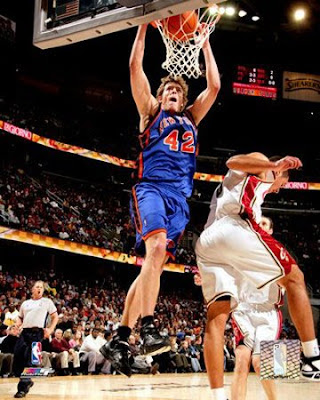 There has been a lot of speculation about how Mike D'Antoni will rebuild the Knicks. Most have suggested that the Knicks do not have the type of players to succeed in the running offense that D'Antoni seems to prefer. With the exception of players like Eddy Curry and Zach Randolph I would like to frehemently disagree.

Obviously it isn't hard to suggest that a healthy and motivated Stephon Marbury could deliver a passable Steve Nash impression on the basketball court. But the player that I think will excel is the player that I have often complained was not properly utilized by Isaiah Thomas - David Lee.

Read this article from Newday and you may begin to understand why I have felt that way and why my confidence in that asserttion is only growing stronger.

Lee said after he heard D'Antoni had accepted the job as the Knicks' coach, he sent a text message to Steve Nash. The two-time MVP point guard of the Phoenix Suns, who spends most of his offseason at his Greenwich Village flat, replied with a promise to work out with Lee this summer in New York.

"This plays perfectly into what I'm trying to do," Lee said of the up-tempo system, which is similar to what he played under Billy Donovan at Florida. "My advantage against other bigs is I'm quicker and faster; I'm never going to be stronger than most of the fours or fives at this level, though I am always trying to get stronger and I will always compete physically.

Posted by Jon Williams at 2:19 PM No comments:

I am not exactly old but when I was younger (not a kid just younger) I was often accused of smiling all the time. It was pretty much true. It was not that I walked around in never ending bliss but rather that I seemed to possess the ability to see the bright side of just about anything. I could find a reason to laugh in almost any situation. I had no problems with anyone. Yes, even the universally despised knew they had someone to lean on, a shoulder to cry on should they find themselves in need. Unfortunately, I lost that talent over the years or (being optimistic) at the very least it has been suppressed beneath a mountain of grief, betrayal and misery – what you might call life.

These days I doubt everyone’s good intentions. I count on most things ending badly. I have people that I have no choice but to consider enemies (like Spider-Man and Electro) despite wishing it were not so. I still laugh a lot but these days that laughter is about the futility of things I cannot see getting better. But despite all of my negative trends of late I still think it is pretty sad that no major league baseball team will offer Barry Bonds an opportunity to play.

There are plenty of teams that could use a player like Bonds as an upgrade to their designated hitter position or as an outfielder. A few teams even discussed bringing him in this spring but universally they all decided that it wasn’t worth it. Bonds’ lawyers have raised the issue of collusion against their client by Major League Baseball. I seriously doubt that there is any effort being made to keep him out of the game unless it is by the media which has enjoyed trashing him for years now. I don’t doubt that he brought this negativity on himself by being generally boorish and his involvement in the BALCO scandal but he isn’t the only jerk in the sport nor is he the only one in the game who has been accused of using performance enhancing drugs and has denied it.

Ask yourself this question: why is Barry Bonds who has never failed a drug test and denies the use of performance enhancing drugs not wanted in the sport and any of a dozen players who have tested positive and been suspended for it welcome to continue playing for multiple teams? Is it because he’s a better player than the assortment of unapologetic losers who have been caught? Is that why Roger Clemens is being put through the ringer (he too having never failed a drug test and constantly denying the use of any performance enhancing drug) because he was one of the best ever?

I have asked many people why they are so quick to believe the worst about the best players in the game. Almost without fail the answer comes back as an accusation of naivety on my part for giving them the benefit of the doubt. I don’t think I’m naïve if anything I’m sympathetic. I’ve been falsely accused of serious wrongdoing in the past, and punished for it despite the fact that I was completely innocent of what I was accused. I am not suggesting that I or Barry Bonds or Roger Clemens is an angel, far from it, but no one has successfully proven their wrongdoing and until then I will believe them innocent. My prediction this week is that unless you’ve been falsely accused of something you won’t be able to do the same.

Posted by Jon Williams at 3:00 PM No comments:

I'm a little late sharing them this week but as usual I have articles on Rotoexperts.com and CrucialTaunt.com.

Moving Up, Moving Down

This week Moving Up, Moving Down touches on a topic that is very interesting to me - The Art of Fantasy Baseball. This is an area I plan to explore a lot in the very near future. I think the Art of our game is something that every fantasy owner of every fantasy sport out there should be learning about even if at the time they aren't aware of it. It may interest you to know that I've actually begun a book based on the idea. It's good stuff on briefly touched on in the article but hopefully thought provoking nonetheless.

Anyone that has read my work for a while won't be as shocked as some by the ideas in my latest article - namely that Barry Bonds and Roger Clemens should be left alone and allowed (if they so choose) to continue to play the game that they both play so well. If you read the article you will definitely learn a thing or two about me which isn't something I do a lot. Check it out.
Posted by Jon Williams at 11:56 AM No comments: