I think Fister has been underrated the last few years. He did seem to come out of nowhere and excelled with the Detroit Tigers under less than ideal circumstances for a control pitcher. Pitching in front of a defense that at its best did very little to assist the pitching staff, Fister excelled. But he can be even better. His strikeout numbers are no great shakes but the move to the National League should provide a small boost.

Pitching in the National League in front of a far superior defensive team, Fister should see his WHIP drop like a rock. If you still have your doubts about Fister consider this: Of starters with at least 75 innings pitched, Fister's 2.04 ERA is the lowest of any active starter against National League teams according to the Washington Post. I think He's a top 25 starter this season, easy. 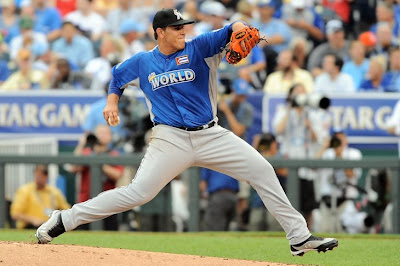 14 of the 17 starting pitchers drafted highest in Yahoo! fantasy drafts this season were selected in the first round of Major League baseball’s June amateur draft. Two pitchers – Felix Hernandez and Yu Darvish – were international pitchers not subject to the draft. The only pitcher in the top 17 who was drafted outside of the first round was Cliff Lee, who was a fourth-round pick of the Montreal Expos in 2000.

Two top-rated starting pitchers were first-overall picks (Stephen Strasburg, 2009, and David Price, 2007). Justin Verlander was picked second overall in 2004. But being drafted first or second does not guarantee stardom. The three other pitchers picked first or second from 2002 to 2007 were Bryan Bullington, drafted first by the Pirates in 2002, Luke Hochevar, drafted first by the Royals in 2006 and Greg Reynolds, drafted second by the Rockies in 2006.  And it’s not as if 2006 was a weak year for pitchers - Clayton Kershaw (drafted seventh by the Dodgers), Tim Lincecum and Max Scherzer were all picked in the top 11.

Six of the top-rated 14 were top-ten picks (Verlander, Kershaw, Strasburg, Price, Madison Bumgarner (drafted tenth by the Giants in 2007) and Zack Greinke (drafted sixth by the Royals in 2002)).

Matt Cain was drafted 25th by the Giants in 2002, Adam Wainwright was drafted 29th by the Braves in 2000 and Gio Gonzalez was a supplemental first-rounder, going 38th to the White Sox in 2004.

Miami rookie Jose Fernandez was drafted 14th in 2011.  Trevor Bauer, now with Cleveland, was drafted third by Arizona in 2011.

Ben Hargrove writes on fantasy baseball leagues for money topics for sites like DraftStreet.com.
Posted by Jon Williams at 7:41 AM No comments: 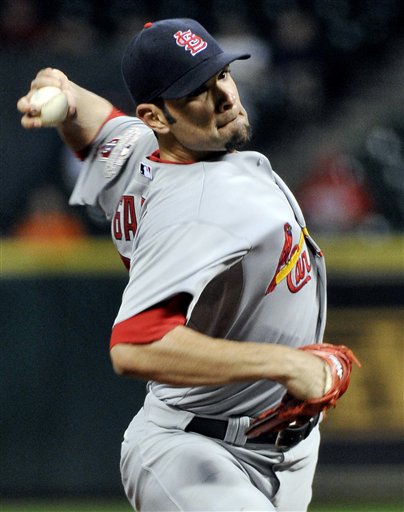 The fraying in his shoulder will keep a lot of owners away from Jaime Garcia. It will also drive his price way down, possibly into the lower single digits. That provides you with an opportunity to purchase a very talented pitcher on the cheap. Garcia has a great swinging strike rate with a solid K9 that should improve. He has good control and a nice groundball rate. He plays for a very good Cardinals team with a nice defense.  For what should be a very small investment you could win big. Garcia is already throwing and will face hitters today (Saturday, Feb. 16th).

Jaime Garcia will face hitters for the first time today since his abortive two-inning playoff performance against the Washington Nationals last October when he throws batting practice to a group of Cardinals position players headed by David Freese.

Today is the first day that pitchers will throw batting practice. Following Garcia, who had shoulder problems much of last season, will be Shelby Miller, who will pitch to a group of hitters including Yadier Molina and Matt Carpenter.

Garcia made nine starts at the end of the 2012 season but was forced out of a playoff game after just two innings against the Washington Nationals after experiencing some shoulder stiffness. Garcia was declared fully healthy in November after several sessions with the Cardinals coaching and medical staffs. He has been throwing regularly since early January without set-backs or problems.


Said pitching coach Derek Lilliquist, "He looks incredibly strong. His arm strength is there and he's in a good frame of mind. We look for good things from Jaime."

"It was one of the toughest things I've had to experience in my career," Garcia said. "But you move forward, you learn from the bad and take the good things and move forward and that's what I did this offseason. I went home and had a good, positive mentality and I did everything asked of me to do and worked as hard as I possibly could and I've been saying this the whole time since the Winter Warm-up but I'm feeling healthy, I'm strong and I just want to take it one day at a time.

"I came into camp like any other pitcher and obviously there's things I have to take care of which are a part of my career, doing my rehab stuff (between starts), but that's just part of it. But checkups with doctors, we're all clear of that. It's been normal the whole time."

Posted by Jon Williams at 1:57 PM No comments:

The Continuing Search For Wins... 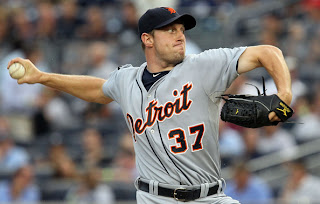 After linking to last year's article in yesterday's Free Draft Kit post, I was asked by a few people for an updated list of the pitchers most likely to add wins to your roster. Remember that the keys are tons of innings, at least a 7.5 K9, and a strong groundball rate. I like the GB rate to be at least 40 percent but I'm flexible if the K9 rate is very high.

I included pitchers with 160-plus innings this year with the hope that we might find a few pitchers ready to make an innings leap. Not many made the cut, due to our high standards.


The names I find most interesting as potential bargains are Anibal Sanchez, Ubaldo Jimenez, Bud Norris, Ryan Dempster, A.J. Burnett, Chris Capuano and Max Scherzer. These pitchers are the ones on this list I would give the greatest odds of having a breakout season as well as coming at a potential discount for various reasons.
Posted by Jon Williams at 12:22 PM No comments:

Posted by Jon Williams at 5:40 AM No comments: