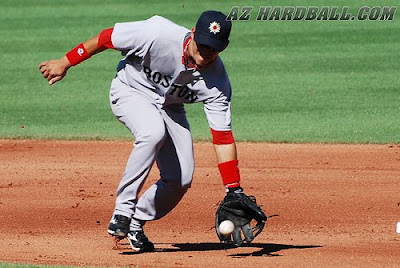 The Boston Red Sox have been struggling to find a long-term solution at shortstop since they traded away Nomar Garciaparra. They won a World Series for the first time in a hundred and something years but Orlando Cabrera, Edgar Renteria, Alex Gonzalez, Julio Lugo, Jed Lowrie, and a few others have failed to make the Red Sox happy for various reasons. The answer may have finally arrived in the form of Cuban defector and shortstop, Jose Iglesias.

The Red Sox signed Iglesias to a four-year, $8.2 million contract. He has been placed on the 40-man roster and invited to big league Spring Training. Iglesias is not expected to begin the season in the majors but could move very quickly. His glove is ready. He has already drawn comparisons to Ozzie Smith and Omar Vizquel. The question (especially for fantasy owners) is will he be able to hit. The Red Sox seem to think so. They expect him to make good contact and eventually develop into a gap to gap hitter with speed on the bases.

From the Boston Herald:

“What jumps out are his raw athleticism and the instincts for the game,” Red Sox director of player development Mike Hazen said. “He’s maybe not polished yet. I don’t know what his coaching was like (in Cuba), and there probably were some nuances -- basestealing, selectivity at the plate -- that need work. But his natural instincts are incredible.”

“His tools are really impressive,” said Brandon Hyde, a minor league manager for the Florida Marlins who is serving as Mesa’s manager. “For as young as he is, he has unbelievable upside. He’s raw, but really talented. He’s an incredible defender. (At shortstop), it’s really about fine-tuning. He has amazing quickness. His hands are great and his footwork is excellent. For him, it’s all in there. It’s really about making the routine play consistently.”

Iglesias should not be high on the radar of Fantasy Owners even in long term keeper leagues at this point. His offense (despite a nice start in the AFL) is still way behind his defense. He will need a few months (at least) in the minors and it may be a few years before his bat becomes fantasy worthy. The hype is going to be huge especially if he does well. You need to know that he is not ready to be a fantasy option just yet.
Posted by Jon Williams at 2:14 AM