Fuentes to Twins, Rodney to Close, Walden the Future? 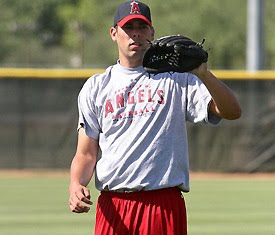 The Los Angeles Angels have sent left-handed closer Brian Fuentes to the Minnesota Twins for a player to be named later. Fernando Rodney will assume the closer role for the Angels. Fuentes will see some save chances for the Twins but as their sole healthy left-hander, Fuentes will often be used in platoon situations.

"He'll be setup and probably occasionally close if I use [Matt Capps] too much," Gardenhire said. "He gets lefties out pretty [darn] good, plus he can close, too, another very, very good arm out in the bullpen with experience. He should help us out."

The Angels insist that trading Fuentes does not indicate they are giving up on the season. They're right, it doesn't. But it is a good move for a team with little chance of winning and a bullpen loaded with younger and superior talent. It also helps that the Angels are expecting a very good player in return.

Angels general manager Tony Reagins said the club will "soon" receive a "prospect with upside" as part of the trade and thanked Fuentes for his two seasons with the club. It's still unknown how much of Fuentes' salary will be picked up by the Twins, as there is $1.89 million left on his contract this season.

Reagins and Angels manager Mike Scioscia said the move doesn't indicate they are giving up on this season and building for next season, as veteran reliever Fernando Rodney will serve as the club's closer the rest of the season, and young relievers Michael Kohn and Jordan Walden have impressed so far.

Walden, who has received a lot of attention lately for his gun-busting fastball, is a future closer candidate. He has awesome stuff but failed to develop as a starter. He is now considered a full time relief pitcher by the Angels. According to the Los Angeles Times, Jordan Walden has reached as high as 102 mph with his fastball.

“These guys are just cutting their baby teeth right now,” Scioscia said. “They’re taking baby steps, but I think they’ve shown great poise on the mound for youngsters coming up. Becoming a Major League pitcher is a process and this is the first steps of it, but they’ve certainly taking that step and meeting the challenge head-on.”

Fantasy owners should hang on to Brian Fuentes if they are still in need of saves. Fuentes may not get many but his overall numbers should improve as he becomes more of a platoon specialist. Fernando Rodney may be available in shallower leagues and is worth picking up for those in need of saves. Rodney is also the likely closer to start the 2011 season as well. Jordan Walden has a bright future in the Angels bullpen and I see him becoming the full-time closer in 2012. He is an excellent speculation pick for those in re-building mode.

Posted by Jon Williams at 9:57 PM No comments:

I am a bit surprised not to have a better idea on where the big free agents (Jason Bay and Matt Holliday) are going to land. At one point I was certain that Holliday would re-sign with the Cardinals and Bay would be a New York Met but that seems far from certain. The Red Sox seem suddenly obsessed with defense after having a poor showing in 2009, though essentially the same team wasn't so bad in 2008. The Cardinals are acting as if they didn't realize that Holliday wanted a contract befitting a player ranked among the best in the sport.

Meanwhile, the New York Mets continue to act (as excellently described by the New York Post before Christmas) like a small market team. They act as if they want Jason Bay but they make offers they know he will not accept. They desperately need pitching but are chasing retreads rather than attempting to acquire talent that could make a real difference. But at least they aren't the Los Angeles Dodgers who seem more obsessed with dumping payroll than improving the team. It is hard to take a team seriously that dumps, Randy Wolf, Orlando Hudson and Juan Pierre only to bring in Jamey Carroll.

It would be a massive understatement to say I have been distracted the last couple of weeks. I have a ton to catch up on. I've been banging out e-mails this week. If you've been waiting for a response from me you should be getting one very soon. The team reports will continue and hopefully appear much more frequently. My big secret project is going very well. It will be extremely useful to any fantasy owner and free to my loyal readers. I also have the annual All Sleeper Teams in progress, and a report on my Shortlist pitching strategy.

Braves trade Vazquez to Yankees for Melky Cabrera and prospects

The Yankees acquired Javier Vazquez at a bargain rate but the Braves received exactly what they wanted. For the Braves, outfield depth, bullpen depth and a quality prospect was an extra added bonus to the millions of dollars in salary relief. Atlanta would have preferred to deal Derek Lowe who had the larger salary and the worse season in 2009. But make no mistake the Braves are happy with the return.

You have already been hearing how Vazquez was thought to lack gumption, grit, fortitude, and doggedness but that's all so much baloney. Vazquez was fine the first half of his first season in New York but a shoulder injury that he kept quiet trashed his second half stats.It may have looked like a choke but it was not. If more evidence is actually required you can look to the 2009 season. The Braves were in playoff contention the entire season and Vazquez led the staff.

Vazquez does have a history of underachieving. But this looks like a combination of bad luck and playing for bad defensive teams in launching pad stadiums. His strikeout rates and walk rates have been great. His groundball rates have typically been around 40 percent. He isn't like to match his 2009 season pitching in the American League East but he should be one of the top starters. For fantasy owners he is likely to provide a ton of strikeouts and more than acceptable ratios. but pitching for the Yankees also gives owners reason to hope for a high win total. Wins are unpredictable but a fantastic offense backing a great pitcher is what you hope for and you'll find it here.

The Diamondbacks and right-hander Bob Howry have agreed to terms on a one-year deal with a team option for 2011.

The Diamondbacks are building a solid bullpen with Bob Howry added to the earlier acquisition of Aaron Heilman. Juan Gutierrez and Chad Qualls were already in place. Any of these names could find save chances but until we hear differently Qualls is the primary closer. Fantasy owners in deeper leagues should feel confident buying any of these relievers in the $2-3 range as cheap saves speculation. The Diamondbacks seem to be strengthening their bullpen as a method of protecting their younger arms (though the best of them was traded away recently).

Howry is a solid pitcher who does not own spectacular skills but also owns few weaknesses. He is a solid complement to any bullpen. He has the veteran savvy to handle the closer role, though he has received few opportunities. He is likely to settle into a vital set-up role with the D'Backs.

The Oakland Athletics have re-signed Justin Duchscherer to a a one-year deal pending a physical. The base salary is $2 million, but Duchscherer could earn as much as $5.5 million with incentives, should he reach benchmarks of 30 starts and 200 innings.

My first thought is that if the Athletics are spending money on him it can be taken as an indication that he is past the worst of his back, arm, and confidence problems. The A's know him better than any other team. There is no question in my mind that a healthy Duchscherer is going to pitch well. If fantasy owners can sign him at bargain rates than I heartily recommend doing so.

Duchscherer's strength has always been in his control. If he struggles early with walks, it may be a sign that things are not right. the Athletics have brought in an interesting group of players with rumors of more in the works. They feel like an underrated team to me.

The Angels have come to terms with free-agent reliever Fernando Rodney on a two-year deal reportedly worth $11 million, according to ESPNDeportes.com.

Brian Fuentes may not be the perfect closer but unless he gets hurt there is little chance of him losing his job to Fernando Rodney. The Angels may see him as a potential replacement and he is capable of getting the job done but his skills are nothing special. He should be a fine back-up plan if you own Fuentes and have room on your bench. Otherwise, Rodney is just another reliever with consistency problems. His control stinks, and even with a 4.40 ERA, his BABIP and FIP both indicate that he was a little luck last season.

Free agent corner infielder Troy Glaus and the Atlanta Braves have reached a tentative agreement on a contract, a baseball source told ESPN.com on Wednesday.

When Troy Glaus is healthy he has been a productive and powerful bat in a lineup. But staying healthy has been a problem. The Braves obviously believe that he should be healthy this season because they seem to be counting on him to fill the role of power hitting first baseman. As long as he comes dirt cheap this is a good risk for fantasy owners as well.

The Yankees have plenty of thunder in their lineup. Alex Rodriguez, Mark Teixeira, Curtis Granderson, Derek Jeter, Jorge Posada, Nick Swisher and Robinson Cano can probably deal with the difference between Hideki Matsui and Nick Johnson. Brett Gardner is also a better bat than you think. Johnson will bat second and his primary function will be to get on base and score runs. However, in the Yankee lineup he is likely to have more RBI than the typical number two hitter.

Carroll is a solid player but this is obviously an attempt by the Dodgers to fill a hole without spending any money. Carroll and DeWitt will only be of marginal value in deep NL-only leagues.
Posted by Jon Williams at 2:25 PM No comments: