Mark Prior Signs with Texas Rangers 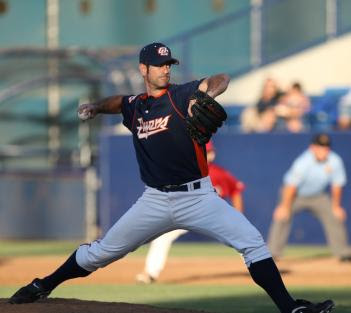 This according to the latest Newberg Report:

According to at least one local report, the Rangers have signed righthander Mark Prior to a minor league contract for 2011. The 29-year-old ex-ace hasn’t pitched in a major or minor league game since 2006. He’d last suited up for the Orange County Flyers of the independent Golden Baseball League.

The Rangers have announced that Prior will report to Oklahoma City, where he could pitch in relief right away. The RedHawks lead their division by two games with four to play.

I went to the official Orange County Flyers website to see how he had done in the GBL. Apparently he was appropriately overwhelming to the indie-league batters. He was working under former major league pitcher, Paul Abbott.

Prior worked with Abbott, an 11-year MLB veteran in his first year as Flyers manager, during his time with Orange County on developing the proper tools to come out of the bullpen. Last week, Prior pitched on back-to-back days for the first time in his professional career. On Tuesday, he threw a scoreless 8th inning for Orange County with two strikeouts against Na Koa Ikaika Maui, the team the Flyers will face in the first round of the playoffs starting next week. Prior signed with Orange County on August 3, throwing a 1-2-3 inning of relief in his Flyers debut against the Victoria Seals. He struck out five consecutive batters in his next outing. In his 11 innings of work, Prior allowed one unearned run on five hits with five walks and 22 strikeouts with opponents batting .143 against him.

“It’s a great day for Mark Prior, getting back into affiliated baseball,” said Abbott. “He came here to face competitive baseball and see if his arm would hold up, and he passed that initial test. Now he’s ready for the next step. He was a true professional while he was here. He was a Flyer, he was one of the guys, and he’s going to be missed.”

If he can stay healthy it looks like Mark prior may actually make a comeback. Good for him. This is someone fantasy owners should definitely keep an eye on.
Posted by Jon Williams at 5:51 PM 7 comments: