Thinking About Jose Lopez as a Colorado Rockie

Last night, I didn't really understand why the Colorado Rockies traded for infielder Jose Lopez. This was based on his disappointing performance five of the seven seasons he was a Mariner. Even in the two seasons he wasn't exactly horrible, there was a lot of room for improvement. A poor track record combined with already having three middle infielders battling for one starting second base job already, made the decision seem ludicrous.

Eric Young, Jr is probably the favorite candidate of fantasy owners. He has hit for average, gotten on base and stolen a ton of bases in the minors. His first 250 at-bats in the majors have not been stellar and his defense is a little rough. However, he looks like a quality leadoff bat to me and if the Rockies would let him settle in a bit I'm certain he would produce.

Jonathan Herrera has been less consistent but has shown he can draw a walk when pressed and play decent defense. He performed better than Young for the major league team in 2010, but his ceiling is far lower and he does not have the same kind of physical tools.

Chris Nelson has the best power of the original candidates. He might best fit the profile of a Rockies hitter but that isn't always a good thing. He performed decently at shortstop when Troy Tulowitski was injured.

What I failed to mention yesterday is that Lopez has very good power. He is a dead pull hitter which did a lot to ruin his numbers playing in Safeco Field. However, the same type of hitter can thrive in Coors Field. But Lopez has been very inconsistent and that isn't all about the ballpark he's spent his career within. But if he wins the job he might reward a lucky fantasy owner with 30-plus homers.
Posted by Jon Williams at 3:22 PM No comments: 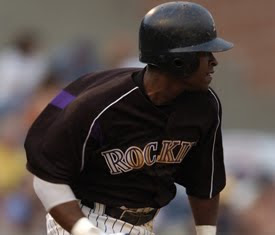 The Colorado Rockies placed shortstop Troy Tulowitzki on the 15-day disabled list with a broken left wrist. They say Tulo will miss six to eight weeks with the injury. Experienced fantasy owners know that wrist injuries can linger and sap a players power months after they've returned to the playing field. But every player is different and Tulo owners should hope for the best as they prepare for the worst.

The Rockies have replaced Tulowitzki on the active roster with prospect Chris Nelson. Nelson has played well at Colorado Springs batting .311 with five home runs and 20 RBIs but Clint Barmes is expected to get most of the starts at shortstop with Melvin Mora and Jonathan Herrera competing with Nelson for playing time at second base. I suggest picking up Nelson in NL-only leagues. He many not receive many at-bats but he has the highest ceiling of the trio.
Posted by Jon Williams at 6:50 PM No comments: