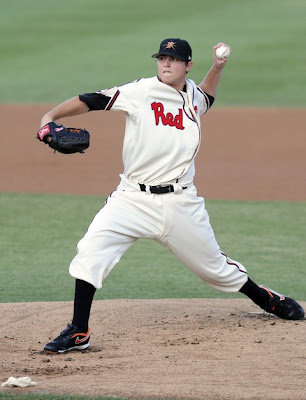 The Baltimore Orioles are very close to re-emerging as a force in the American League East. They have the core of a solid lineup in place. The offense is led my right fielder Nick Markakis (.293/.347/.453) and features several emerging young hitters. Matt Wieters will catch and although he did not look like it in 2009 could be the best hitter on the team. Adam Jones, the center fielder who constantly frustrated the Seattle Mariners with his injuries and uninspiring performances, was arguably one of the best hitters in baseball for the first two months of the season. Left fielder Nolan Reimold led the team with a .365 wOBA (of players with at least 140 at-bats) and an .831 OPS. Veteran second baseman Brian Roberts continues to be a steady presence in the lineup providing surprising power and steals in bunches. Luke Scott (.229 ISO) enjoyed his first season in the AL very much, providing power from multiple positions(but mostly DH).

The 2009 rotation fronted by names like Jeremy Guthrie, Jason Berken, Brad Bergesen, David Hernandez, and Rich Hill was largely a disaster. None of these guys were very successful but they won’t need to be in 2010, which is when a highly touted group of pitching prospects is expected to have a major impact on the future of the Baltimore Orioles. Brian Matusz, Chris Tillman, Jake Arrieta, and Zach Britton should debut in 2010. These names should be on the long-term radar of fantasy owners searching for the next Felix Hernandez, Jon Lester, or Brandon Webb.

Fans of other teams or ones too young to remember may forget just how much financial muscle the Orioles can muster. It was not that long ago that the Orioles had one of the highest payrolls in baseball. They can hang with the big boys in the AL East when they judge that it is once again time to reach into the wallet for that missing slugger or ace starter. This is very important. Unlike the Tampa Bay Rays or Minnesota Twins who struggle to hang on their talent past their arbitration years , the Orioles can go dollar for dollar with almost anyone.

Nick Markakis, OF
Before the 2009 season, Nick Markakis signed a six-year, $66.1 million contract. Then he had a disappointing season. It happens a lot. Players try to justify the money they are earning and become more aggressive and slip out of the game that won them the contract in the first place. You can see it pretty clearly in his stats. His walk rate went down quite a bit. He was swinging at more pitches out of the zone, and fewer pitches in the zone. The result is a drop in almost every meaningful stat. On top of this, he was probably a little unlucky as well. His BABIP dropped to .323 in 2009, which is only high when not compared to Markakis’ previous career average. Even his defense suffered. This is a player out of sorts. Fortunately, Markakis is such a talented and disciplined hitter than even when he not focused he is capable of producing decent stats.

The 2010 season should see a resurgent Markakis kicking butt in the American League East. His tools, patience, discipline, and pitch recognition are too high to predict anything else. He has good (not great) speed and can steal 10-15 bases if the desire is there. He has good power that has not yet peaked. His homerun totals may never be very high but I expect his HR/FB to return to their normal levels and that should be enough to push his homerun total back into the 20-25 area even if nothing else changes. However, just a small improvement in his FB rate might have him surpassing 30 homers as has been predicted for Markakis in the past. At his 2009 fly ball rate and a 12 percent HR/FB rate 600 at-bats would leave him just a fraction short of 30 homeruns. Fantasy owners should be very careful not to believe that they have seen the best of Markakis. He is just reaching what should be his peak years. Unless there is an injury that we do not know about I am much more comfortable predicting a career year than another down season.

Matt Wieters, C
One of the big stories of 2009 was the wait for Matt Wieters. The Orioles wisely as it seems, sent Wieters back to the minors to begin the season to cries of “cheap bastards” and worse from those believing they did so solely to save a few bucks and delay arbitration another season. As it turns out, Wieters did not dominate in the fashion of his 2008 season. He was producing, especially relative to his position. His late May promotion did not come with the offensive explosion that many fantasy owners were awaiting. For the season, he produced at about the level of the average major leaguer, which from the catcher position is super. It just is not what a fantasy owner is looking for out of his stud, catching prospect.

Wieters has shown signs of being a highly disciplined hitter. I expect him to improve in almost every area in 2010. His walk and contact rates should edge closer to his minor league levels as he gains experience. He is a linedrive hitter who rarely swings at pitches out of the strike zone. I also have to imagine that a more confident Wieters will manage a better HR/FB than the 8.4 percent mark produced in 2009. The Orioles have worked hard to keep from putting immense amounts of pressure on their young catcher. That should pay off for fantasy owners very soon.

Josh Bell, 3B
Josh Bell became an Oriole via the Los Angeles Dodgers by being the primary return in the George Sherrill trade. There is a strong possibility that he begins the 2010 season as the starting third baseman. Oddly, it seems his development as a switch hitter is going to be a major factor in the decision. Bell is extremely good from the left side of the plate facing right-handed pitchers. According to minorleaguesplits.com, Josh Bell hit .340 with 19 homers in 315 at-bats as a left-handed hitter, and .198 with one homer in 131 at-bats as a right-handed hitter in 2009. Most reports say his mechanics are fine from both sides of the plate though ESPN’s Jason Grey has said he can “get a little big” swinging from his heels on the right-handed side.

There are those that believe that Bell should abandon switch-hitting and become a left-handed batter. This is the possibility most likely to send Bell to the minors (assuming he has a strong spring and the Orioles do not make a huge move to fill the position). In this scenario, the Orioles would be unlikely to allow Bell to adjust to seeing left-handed pitching from the left side in the majors. Fortunately, those closest to the Orioles believe they are happy with Bell as he is and want to see him continue to switch hit. The belief there (and here) is that Bell can develop enough as a hitter from the right side to be an asset.

Josh Bell just became more dangerous as the season and the post season passed. He was a monster in the AFL. He posted an Isolated Power of .281 (for reference Alex Rodriguez has a career ISO of .271) after the trade, during 114 at-bats at double-A for the Orioles. On the season, he slashed .297/.370/.538 with 35 doubles, 2 triples, 20 homeruns. He also received a very favorable projection from theThe Bill James Handbook 2010

. He probably will not be much of a sleeper come draft season but he is an incredibly talented prospect that is worthy of fantasy attention even as a rookie.

Zach Britton, LHP
He has not received as much attention as Matusz, Tillman, Arietta, and even Brandon Erbe but Zach Britton may outperform them all. Nothing attracts me to a pitcher like the combination of strikeouts and inducing groundballs. In the last three seasons, Britton has GB rates of 64.5, 63.8, and 65.0 percent and K-rates of 6.36, 6.96, and boosted it to 8.42 in 2009. His rates are only getting better as he increases levels, which is a very nice indication of his development. His walk rates do show room for improvement, but are not high enough to be a major problem. I keep looking at him and thinking Brandon Webb. I like this guy a lot.

Posted by Jon Williams at 2:28 AM No comments: