Ryan Braun spoke out today regarding the process he took to proving himself not guilty of taking any illegal substances. There isn't much there that we haven't heard from other sources but it is interesting to hear the way he defends himself.

Posted by Jon Williams at 5:07 PM No comments:

I just wanted to wish Mark McGwire good luck in his new position as the hitting coach for the St. Louis Cardinals. I have read much praise from the players that he has worked with individually. I think he will do very well in this position and the Cardinals will benefit from what he has to offer. I used to love the A's back in the days of the Bash Brothers, with Ricky Henderson and Dave Stewart. They were incredibly fun to watch play. In those days the A's were one of the best teams in the game and had league-leading payrolls. McGwire was the true star of that bunch, when he was healthy anyway. You should watch the video attached to this article about Tony LaRussa returning to the Cardinals to hear LaRussa discuss McGwire's transformation as a hitter.

Below this great photo I discuss the reaction to McGwire's return by the dumber members of the mainstream media and their parroting groupies. 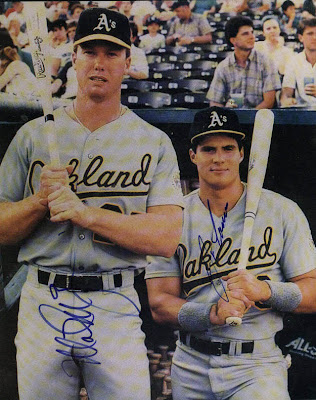 There is no proof that Mark McGwire ever used any illegal drugs before, during or after his baseball career ended. We know that he used Andro, because he never hid it. My old roommate was using it too before most of us even knew what it was. Most of the people commenting about this still do not know what Andro was. And it is because he did not hide it that much of this PED controversy exists today around the game of baseball. Androstendione was not illegal or even considered an anabolic steroid at the time McGwire was using it. You could have bought some yourself from many different legal sources. It was reclassified in 2004 when the Anabolic Steroid Control Act of 2004 was introduced into the United States Senate.***

***If people in this country were assigned jobs based on their intelligence and focus on what actually matters most of the Senators speaking out in what I call the Steroid Trials (and their media lackeys) would find themselves working for Burger King.

I have read many different articles in the last week or so and hundreds of comments by the readers of those articles that make claims that are just not true or fair. Today I read an article that basically claimed that McGwire was responsible for the suicide of two kids who used steroids. No. No he is not. If a kid is using steroids that responsibility lies with the kid himself, his parents and the people of responsibility around him. I have read the McGwire ruined baseball despite the fact that when he was hitting all those homeruns for the St. Louis Cardinals he was being labeled the savior of baseball. I have read that Mark McGwire now hides from the public scrutiny he deserves because he is so ashamed of his steroid use, and his lies. First, what lies? Can someone please show me when McGwire was proved a liar about anything to do with baseball or him using any form of PED? Second, when has Mark McGwire ever sought out media attention? Remember how when McGwire was hitting all those homeruns and everyone loved him and was anxious to hear his every waking thought, that he avoided the media like the plague. Seems like the kind of guy who avoids public speaking whenever possible.

You do not have to like Mark McGwire. I am certain he has habits that may annoy people. Maybe he clips his nails at the kitchen table or he leaves hair on the bar of soap in the shower. But I think it is wrong to punish the man over something that probably had little impact (if any at all, if he even did anything wrong which is not so certain as it is usually made out to be) on his career as a whole and most certainly did not hurt anybody or cause anybody to hurt themselves.
Posted by Jon Williams at 1:01 PM No comments:

Is Your Fantasy Team on PEDs? Please Vote 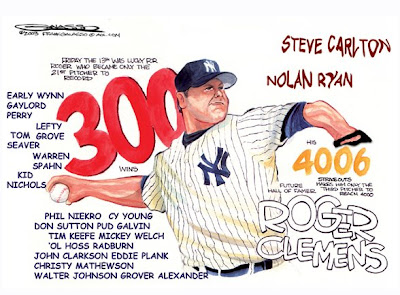 According to a story in this morning's New York Times, Roger Clemens did not test positive for any banned substances in the 2003 round of testing that led to the present PED policies. Clemen's lawyer Rusty Hardin obtained the test results by waiving the player's right to privacy regarding the results. These results have been passed on to Congress which has been investigating the claims against Clemens.

“The results show Roger was negative in every respect, performance-enhancing drugs and masking agents,” Hardin said. “The only reason why I mention it now is because Roger is being mentioned with Sosa and Rodriguez, who have been tied to 2003 tests, and Roger didn’t test positive.”

This is huge for Clemens who has struggled to clear his name in face of accusations from his former trainer and statements from former teammate Andy Pettitte. While this is far from the end of the investigation it must give Clemens a bit of a boost. It is much more difficult to disprove a claim than to provide evidence in favor of one. This is a sample of the dis-proving evidence that Clemens needs.

Unfortunately it won't be enough for anyone convinced of Clemen's guilt in the matter. His former trainer, Brian McNamee's statements in the Mitchell Report made claims about use from 1998 to 2001. He provided needles and used gauze that he insists he saved for nearly a decade as evidence to support his claims. No matter how ridiculous that sounds, it is being taken seriously by Congress.

If you need something supporting the claims that Congress is after a PR win more than the truth look no further than their release of medical records showing that Clemens was treated for a possibly drug-related abscess in 1998. An abscess is a localized collection of pus that generally develops in response to infection. An abscess is typically painful, and it appears as a swollen area that is warm to the touch. The skin surrounding an abscess typically appears pink or red. But they could just as easily released the negative tests at the same time but they chose to keep the non-damning evidence to themselves.

I have said it more than once that as someone that has been falsely accused I feel I have to give Roger Clemens and the other accused the benefit of the doubt until conclusive evidence is revealed. On the Fourth of July it should be easy to remember one of the tenets of American Society used to be Innocent Until Proven Guilty.
Posted by Jon Williams at 3:22 PM 1 comment: