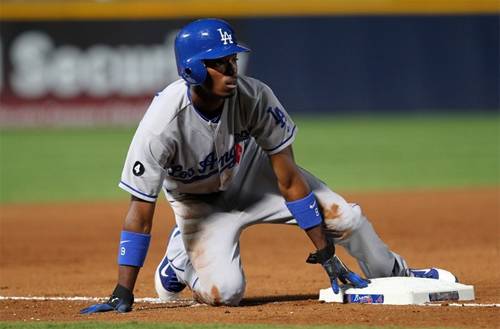 Hanley Ramirez tore a ligament in his right thumb during the final game of the World Baseball Classic. The Dodgers expect him to miss at least eight weeks. A mid-May return is probably the best we can expect for Ramirez who had been playing very well this spring. This obviously has a huge impact on his Draft Day cost and 2013 value. He loses nearly a third of his potential playing time. If you had him as a 40-45 dollar player he looks more like a 27-30 player.

The biggest playing time beneficiary should be last year's shortstop Dee Gordon. Gordon has had a impressive spring to date with an On-Base Percentage around .400 just as manager Don Mattingly requested. In a full season Gordon was already capable of a 50-steal season. If he maintains this level of patience (which isn't far off his minor league levels) over a full season he could easily swipe 70 bases. Few expect Luis Cruz to be successful as the starting Third Baseman so there is a natural roster development (Hanley Ramirez moving back to third base) if Gordon is playing well. In addition, Mark Ellis has been injury prone in the past and Gordon could quickly transition there as well. At Gordon's current ADP he must be considered an excellent sleeper source for steals from the shortstop position.

Tommy Hanson was pulled from Wednesday's start against the Cleveland Indians after complaining of triceps stiffness while warming up for the fourth inning. Hanson (as the Angels should be well aware) has a history of battling through injuries to pitch even to his long-term detriment. So, when catcher Chris Ianetta spotted Hanson shaking his arm he confronted him about it. Hanson insisted he was fine and prepared to pitch. He even said after the game that there was no chance he would miss his next start. Hanson had been pitching fairly well until his removal with four strikeouts to just one walk through three innings. His velocity was in his normal range. The Angels confirmed they pulled him just to be safe.

If something does develop right-handers Garrett Richards and Jerome Williams would be the leading candidates (neither can be recommended as more than a late/reserve rounds flyer) to replace Hanson in the rotation. Hanson has been a late round draft pick in most leagues and little more than that even in Al-Only. Hanson was very effective in the first half of the 2012 season before descending into wretchedness in the second half. No injury was reported. It is very possible that Hanson merely tired down the stretch after missing half of the 2011 season.

As fantasy owners we crucify guys like Evan Longoria for being injury prone. Somehow Pablo Sandoval who is at least as bad if not much worse has escaped the label. Sandoval has had a bone spur in the same elbow the last few years (since 2009) but supposedly it has not been a problem only causing him to miss a few days during the 2009 season. The current injury has been diagnosed as Ulnar Neuritis which is of the Ulnar Nerve. Sandoval has been suspended indefinitely from all baseball activities. There is no schedule for his return but the Giants believe he will be ready to start the regular season.

The Giants do not really have a back-up plan if the Panda goes down to injury. They traded away their most advanced third base prospect - Conor Gillaspie. Marco Scutaro is locked in at second base. That leaves Joaquin Arias as the most likely replacement. Sandoval owners will want to draft the best possible reserve at third base as Sandoval could be in and out of the lineup all year.


Posted by Jon Williams at 3:24 PM No comments:

Posted by Jon Williams at 7:08 PM No comments: 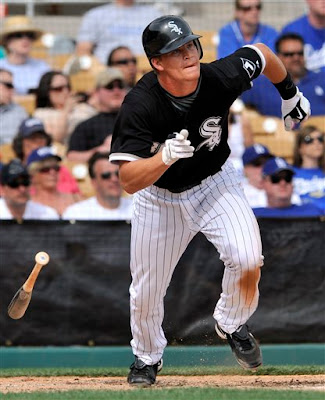 Wednesday was a big day for top prospects. Tommy Hanson, the Atlanta Braves stud pitching prospect was called up and will start for the Braves on Saturday. Gordon Beckham, the stud shortstop prospect of the Chicago White Sox was recalled and will start nearly everyday at a variety of positions. Andrew McCutchen, the stud center field prospect for the Pittsburgh Pirates will now roam the major league outfield.

Tommy Hanson and the Atlanta Braves
Tommy Hanson was called up by the Braves as part of series of moves. They traded for the Pirates' center fielder, Nate McClouth. Then they released 305-game winner, and future Hall-of-Famer, Tom Glavine. It seems this was mostly a cost-cutting measure as Glavine was due a significant bonus when activated. This move looks pretty classless to me. I understand that business is business, but Tom Glavine deserved better from the Braves. These are not the Braves they used to be. Kris Medlen was scheduled to start on Saturday against the Milwaukee Brewers, but has been moved to the bullpen in favor of Hanson.

Hanson has been dominating at Triple-A Gwinnett. He was clearly ready to take the next step in his development as a potential major league ace. Despite his potential, Hanson is still more likely than not to suffer through the ups and downs that all young starters experience. That said, you would be a fool not to pick him up, especially if you have the ability to stash him on your bench. Milwaukee is an awful tough team to face in your first start. He induces a lot of infield fly balls. He is fairly neutral as to whether he is a ground ball or a fly ball pitcher but take out the infield fly balls and he leans more towards being a worm killer. He does a very good job of keeping the ball in the park.

Andrew McCutchen and the Pittsburgh Pirates
The Pittsburgh Pirates filled the gaping hole left in their lineup and in center field with top prospect, Andrew McCutchen. He was probably ready to get a shot at the major leagues but he is more of a leadoff hitter than a middle of the order player. He's been compared to Ricky Henderson a lot, but that is tremendously overstating things. He should get on base at a decent clip and steal bases, but he won't be the kind of roto-guy that can get you 12 points in steals all by himself. This leaves the Pirates lineup seriously lacking in power hitters.

I understand why the Pirates would want to trade McClouth. They can't really expect him to be a part of their next contending team which is probably still three or four years off. But McClouth was signed to a very reasonable deal. They should have shopped him around rather than trade him so quickly. To trade him for second tier prospects cheats the franchise and the fans. One top prospect would have been a much better deal for them than multiple prospects. Especially when they already have a roster (at more than one level) full of similar players. If the Indians can get Matt LaPorta for a couple of months of CC Sabathia, doesn't a cheap and signed McClouth have a similar value?

Gordon Beckham and the Chicago White Sox
Let me tell you how much I loath Ozzie Guillen, the White Sox manager. A lot. He's a complete idiot. The first thing he does when the White Sox announce that Gordon Beckham is coming up (a move Guillen has been very much against) is try to crash the kid's confidence (I don't think it will work, but that is not the point) by telling everyone that he questions Beckham's ability to play at multiple positions. He also refuses to just give the kid a spot and let him stay there. Instead he'll rotate around the infield so that Chris Getz of all players can stay in the lineup. The White Sox will be much better when they get off their butts and fire Guillen. No manager has ever deserved it more.

To make room on the 25-man roster for Beckham the Sox have designated Wilson Betemit for assignment. Tough to believe they won't find a trading partner to take on Betemit. He could find himself back with the New York Yankees. Beckham is a very disciplined hitter for such a young player. He does not strike out much. He doesn't draw many walks but when you're hitting .458 at Triple-A, why bother? He should hit for decent power (in the 10-15 range) and steal more bases (that's Guillen's thing, stealing bases) than he did in the minors.